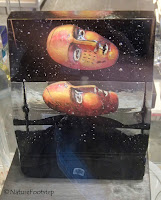 As I arrived at Arlanda in good time I had some time to check the airport out. Mostly when I get there it is very late so stores are closed. This time I spotted this artwork in glass reflected in the mirror on which it was placed. 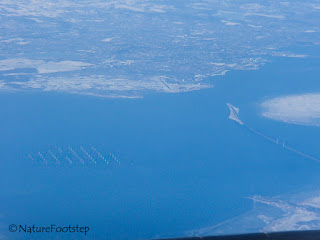 I met our group at the gate and we boarded at normal time. I had a window seat.  On our trip south we flew over the Öresunds bridge that goes from Malmö in Sweden to Kopehagen in Denmark. I did notice there are a large windmill park as well. 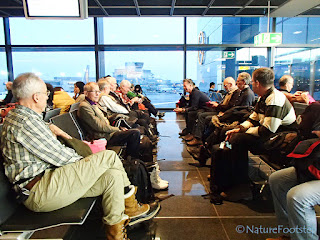 Then we landed in Frankfurt as scheduled at 15,40 and met with our tourguide and the second last member of the group. The last one will meet us in Tokyo. He is from the states. 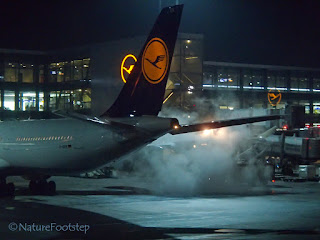 Long flights is not fun. It is a large plane and with a window seat I had to climb over two persons when I needed to go where I needed.

We were served dinner and after that they shut out the light pretending it was midnight. But we were heading towards the light. We landed in Tokyo at one a´clock. Found the guide and she took us, by bus, to the national part of the airport where we should stay the night. At this point a shower was a heavenly thing. 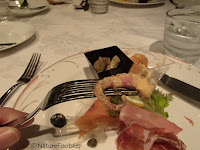 In the afternoon we had the first information meeting in the lobby. And after that it was dinner. And a first serve of Japanese cooking. First time ever I tasted an octopus. 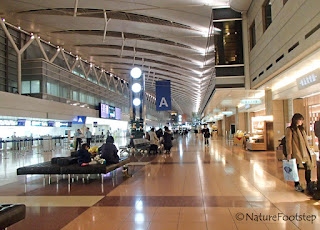 After dinner I went down to the Domestic hall where they also had shops and I bought myself some Coke to drink as I was very thirsty. It was my first purchase using yen. The people did not speak English so we used hands and feet to do it. :) It worked well and everybody seemed it was fun.

Then time to sleep, on the floor, Japanese style.

Linking up with:   Weekend Reflection


Japan on NF Photo  NF Birds around the world