Half way through.
﻿
Woke up 5.30. Met the birders at 6.30 and we were heading back to Kintyre and the Bird Observatory. Lots of rain and wind at first but then it calmed down a bit. Still fun to shoot the Gannets. Now I start to learn their behaviour. They have a cool habit of swooping down to the watersurface. Make a turn and dip the tip of the wing in the water. Sometimes with a result of making them wobble a bit. Seemed like fun. I think the gang, Ola really, saw at least one seasvallow (?). Not sure if there was more. I looked for Twite (vinterhämpling) but did not see any. But I learned how to shoot the gannets at Machrihanish Seabird Obervatory . :)  Map﻿﻿
Back to breakfast Craigard House Hotel at 9.15 and departure to the ferry at 10.30.

Now we left Campbeltown to go to  Kennacraig and the Ferry Berth. It was a large and fairly new ferry with some treats in the design. Well, for me that is.  The  Ferry departured as sceduled and we had 1h45min to do some birding onboard and whatever we wanted to do. . I had prepared a lunchpack, coffee and cookies, on the hotell so I had a thermos with me. I thought it was enough for me. Quite nice to not have so much in the stomach for once. I went out on the front balcony to look around while people eat a lot of lunch. And I took a tour around the ferry.

It was windy. Of course I almost said. And for a moment hard to stand upright. To start with not much action on the water. Spent the time watching the sea and taking some shots. Finally there were some gannets comming into sight. And then mindre lira. And lots of them. And they came close. So fun to see them in the front of the ferry. The sun came out too and made the lirorna glimmer when they moved and circled the wateres. Finally they sat down on the water on the left side. Only to be on the wings again a moment later. Running the water before being airborne. So fun to watch. Some people did se some dolphins too but not me. :( 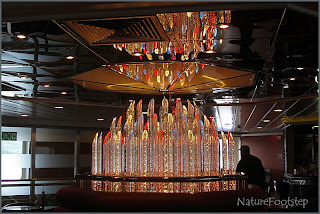 Decoration on the Ferry to the left.

Then we headed in between the two islands and soon the tour to Islay was over. We landed at Port Askaig. We headed for the other side of the island and our new hotel, the Harbour Inn in Bowmore. We got our rooms and 16.15 we left again for some easy birding along the shore and the low tide area.


At 18 we met Malcolm and had dinner at a smaller restaurant. After that Malcolm had an intersting lecture about what they do at the Islay Wildlife Centre in Port Charlotte, and about the birds in the area.
On the way back to the hotel we made a stop at the wetland hopeing for  Great Grey Owl (lappuggla)to hunt the wetland. But there was only the regular birds.

We were back at the hotel at 22.45. A bit too late for my taste. It ment No Shower.  At midnight I realised that I could not get the TV to work. I found a late woman in the staff that was on her way home. She helped me with that. To bed at 00.30. 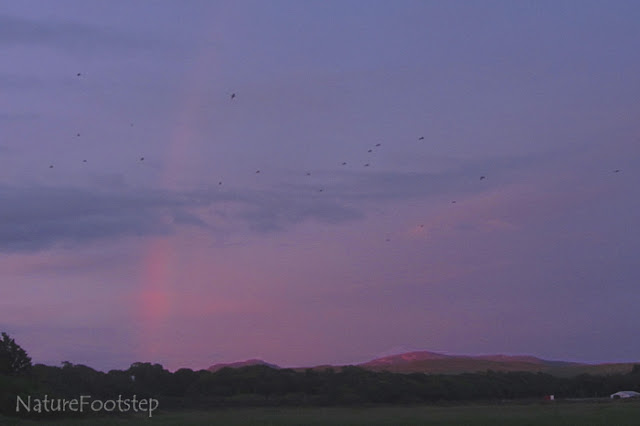