Translate? See Google translation in the sidebar!
Our World Tuesday   Water World   Outdoor Wednesday
Hävringe 120825,  NF Photo 120825, click to enlarge all photos
Last saturday I attended a trip to Hävringe. Hävringe is a small island, about 40 min by small boat, outside Oxelösund in the middle part of Sweden. It is located at the coast of The Baltic Sea. I aded a link to a map so you can see where it is. Haevringe Lighthouse We did not visit the island of the lighthouse but the island close to that is an old pilotage site.
Well, to start from the beginning. Alarmclock was set to 04.05. When I woke up after a lousy sleep I was wondering what the h-k I was doing. I got up, fixed my lunch pack and at 4.50 I was ready to leave. I thought I had lots of time. But... as always. :)
It started out with early morning mist. Did not slow me down too much though but I wished I had more time so I could have stoped to take some pics. But i didn´t. I had to save that for another morning. 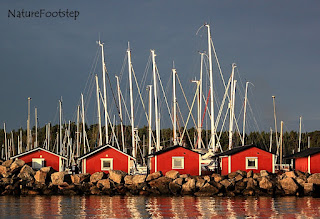 Next problem was a lot of work on the road. For a long time I had to drive slow because the road was only loose gravel. Not fun to drive on. Arriving at Nyköping the main road I shoult have been driving was closed so I had to make a detour. Now I was bothered, would I make it in time? Our guides had warned us they would not wait for late people. Well, I made it with 10 min to spare. It was a nice morning, a bit chilly but so calm the water was glassy. At 6.20 we left the harbour for a 40 min trip to the island of Hävringe. 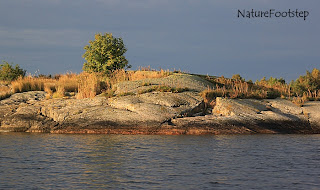 It was really nice to see all islets in the low morning sun. Glowing with a warm yellow color. It is a sight I am not used to. And the birds starting to wake. A few roaming the skies already. 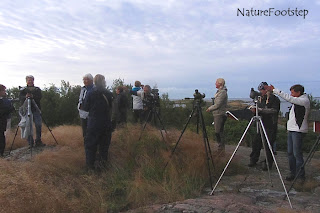 We were 17 woman on the trip. Most of us came from Nyköping and Tärnans Birders.   They took the opportunity to start a new group of female birders belonging to a group we call Rapphönan (Grey Partridge). That will be nice for the future.


The island was not big. There was a few summer houses and the larger building earlier used by the pilotage workers. We put our gear close to it and started to look around on ground, water and sky. Some emediately set up their tubes. Myself I started to walk around to check the surroundings. Then joined the group. It was not that easy to see anything as there was buildings below and trees and bushes. But we did see some interesting waterfowl like a family of Velvet Scoter (Svärta). And swallows of course. 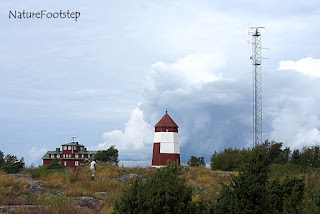 After having something to eat we moved away from the buildings closer to the shore. Looking for birds on the water as well as the islets outside. We did see a Cuckoo on a nearby islet. A bird I did not expect to see there. But that is one of the fun thing about birds. You never know what to find. After an hour or two it started to warm up and we could take some clothes of. Getting a nice feeling of summer again. It was great walking around on the cliffs, then birding again. I did not get many bird shots as they were to far out. But I got a lot of other things in my camera. 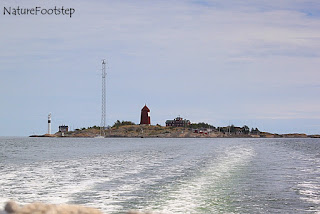 At 13.30 we left the island and headed back to Oxelösund. On one island I spotted a Velvet Scoter and actually got a shot of it.

It was a great day and I say thanks to everybody who organized it and to all who attended.

I was back home at 17.00h. If I was tired? You can guess. :)
I got a mail with a short report. As a group we saw/heard 53 different spieces. Myself I had one new lifer and two new species for the blog. Not bad for one day, right? :)
Labels: Resor, travel, trip, journey, Sverige, Sweden,  sky, photo, photography, Monica Johansson, NatureFootstep, nfphoto, NF_photo, nature, natur, fågelskådning, birding, Hävringe, lighthouse, Oxelösund, Rapphönan, lighthouse, fyr, båk, Tärnan, Svärta, Velver Scoter, fågelskådning, birding,

Posted by NatureFootstep at 10:01 PM