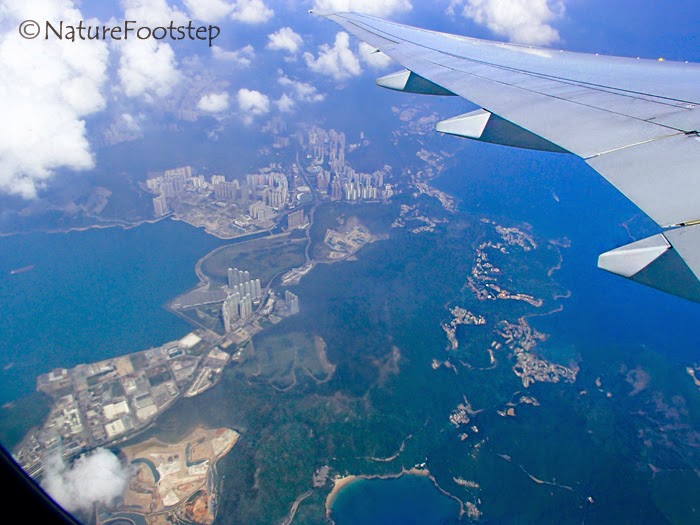 After spending many hours on the airport in Brisbane we finally took off at 00.55h. The last thing I saw of Australia was the bridge. On the plane they began to serve dinner after about an h flight. Dinner??? In the middle of the night? I only ordered coffee and juice and some peanuts. But my companion thought it was a great idéa with dinner. After that we could go to sleep if we wanted as the light was put out. Everything went well and we landed in Hong Kong about 7.45. 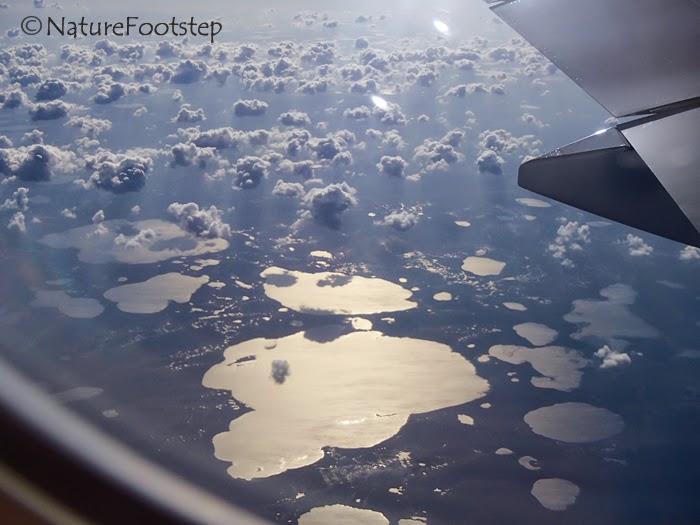 We did not have much time there as the next flight to London was scheduled to 9,15.
That was a long flight but there was not much to see. We travelled north of the Himalyas and there was much clouds.
In London there was trouble with the gates. First you have to go with bus for 20 min before you get to the right terminal. No5. Then we could not go to GATE as there was some trouble there. We were half an hour late before we were assigned a GATE.
So, we was late at Arlanda. But for me that did not really matter as I had to wait for the morning bus. We arrived at terminal 2 and I walked over to Terminal 5 as I am more used to. I walked through a corridor I never visited before. It was all red.  Quite cool actually.
At terminal 5 I took a nap on a sofa. In the morning I went to the money exchange office and changed back the AUS money to Swedish kronor.
Then I took the bus and then the train and was home around 11 in the morning. And then, after a cup of coffee and a sandwich I lay myself on the bed and got to sleep. 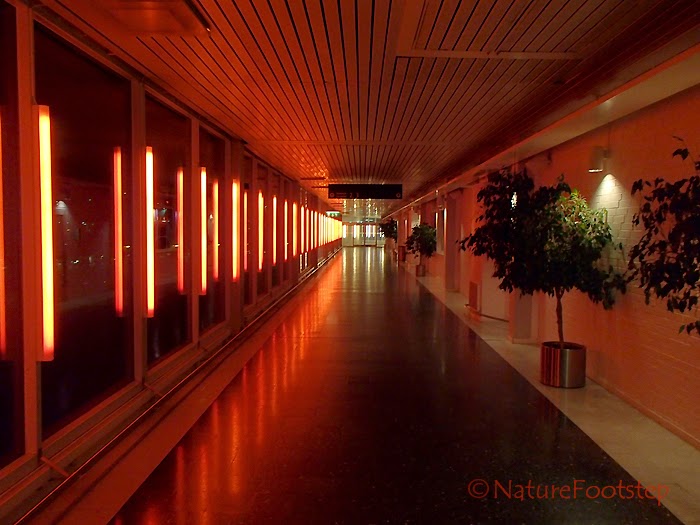 140923 Queensland, Canungra to Brisbane and the Airport


After packing my bags for travelling back home I had my breakfast in the room. I needed help again to bring my luggae down the stairs. It is rather heavy with spotting scope, spare cameras , books and everything else. 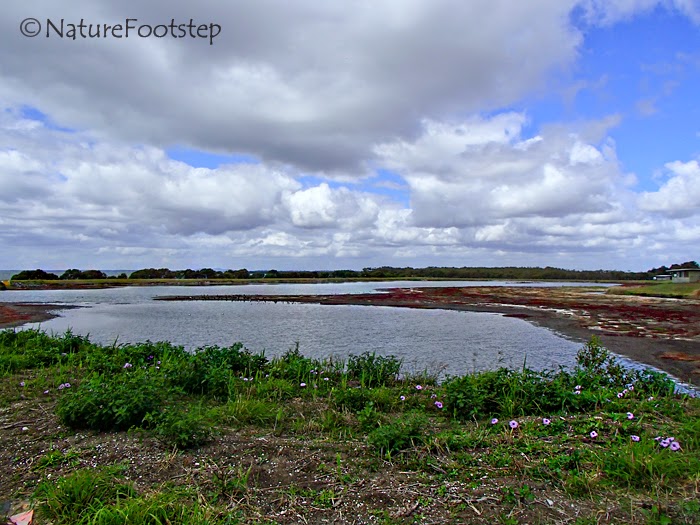 We left the motel at 07.00h to go to Brisbane. We came right in morning traffic and was rerouted to smaller roads as there were some troubles ahead of us.  But our guide was used to this so we ended up at Port of Brisbane. A bit later then planned but still. We made a stop at the office in charge of the hide in  Port of Brisbane wader roost pond to get a key and went there. The place seem to be known as Lytton Roost as well. 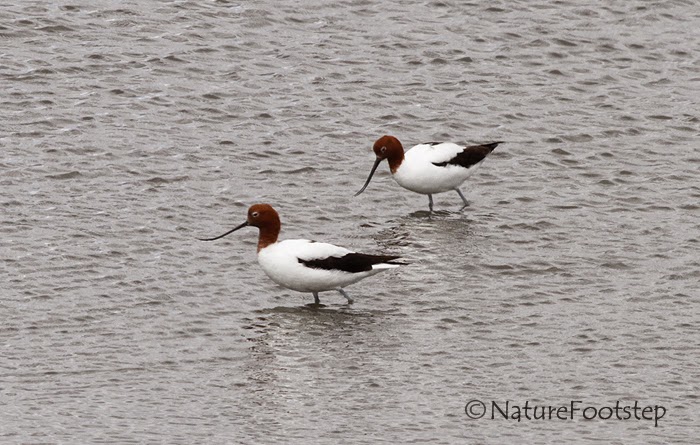 It was a great place for waders, ibises and ducks. I finally could see the Red-necked Avocets I´d been waiting for. There were lots of different birds in this pond. More then I would have thought. It was fun. We could walk all around it and get good views of the birds. Both the small ones and the larger ones. They will all be in my Aus  birdblog when time comes. 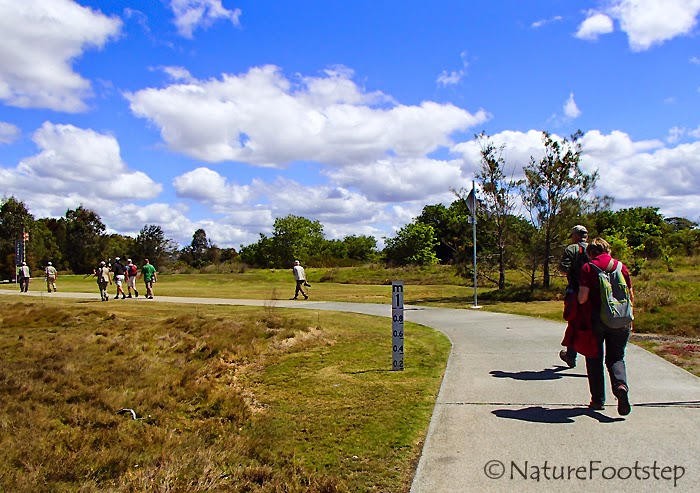 After that we drove to a wetland that was rather dry actually. It was located at "Hamilton Pine Rivers Wheelers cycling club" and we had to watch for bikers all the time. There was an asphalted track for the bikers and small ponds and streams here and there. The area obviously is flooded every now and then as there are poles marking the depth of water level. 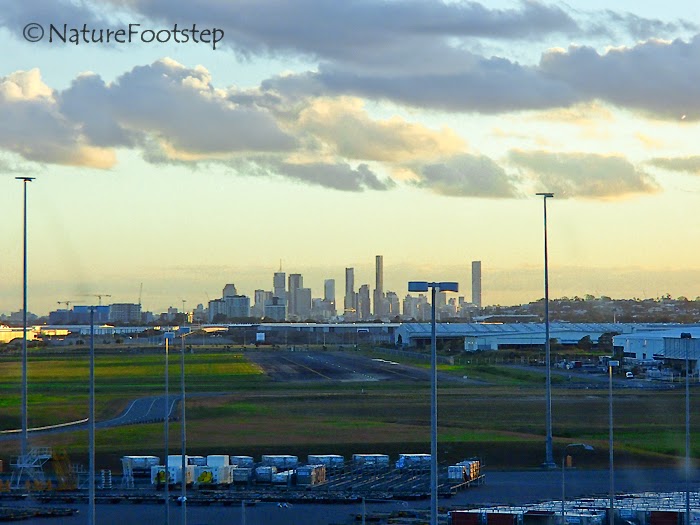 Below, the last thing I saw of Australia was the bridge in Brisbane, just after takeoff. 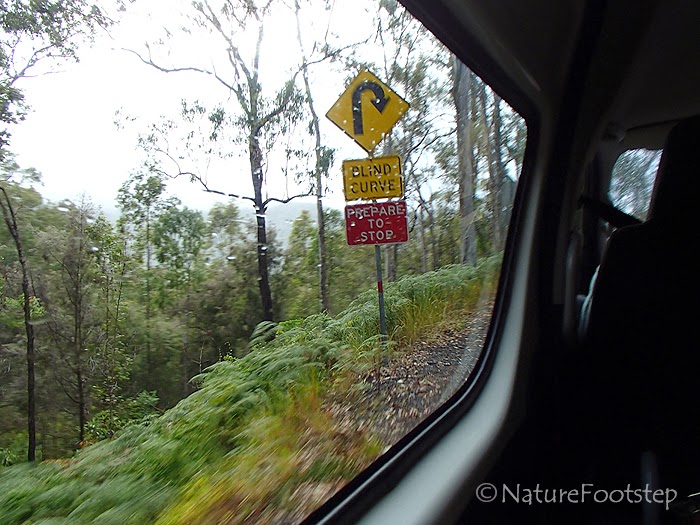 We all had breakfasts in our rooms as there was no restautrant. Then we met at 6,00h to go to Lamington as we wanted to be there early. To see and hear birds before the place got crowded. This is a popular place with restaurant, shops and whatever you want from a place like this. 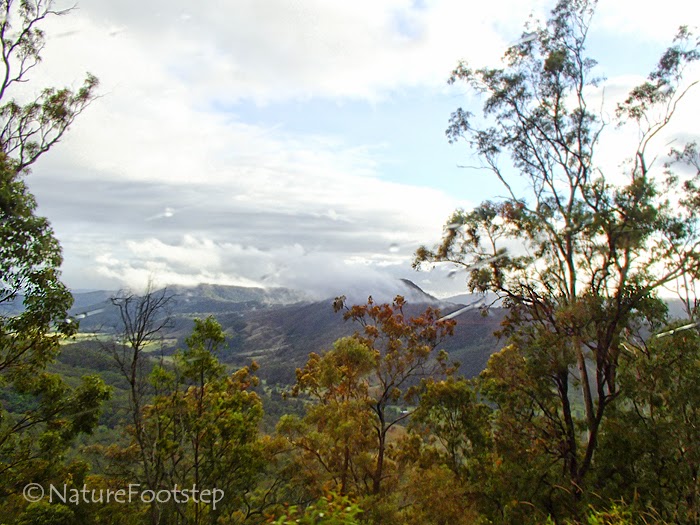 After about 10 km drive the ascent started. We should go up to about 1000m altitude on "alpine roads". Narrow and curvy. It took some time to get to the park.  We had one short stop on the road to watch some doves. And first car had a Lyrebird running over the road in front of them.
Image view over the mountain view from the car.


We spent the morning walking in the rain forest. And raining it was. First really rainy day on this trip. But we were prepared for it.  I guess I´m starting to get bored at rain forests. Not much to see despite all vegetation. After an hour or so it started to come lots of hikers walking and talking scaring all birds away. :(. Well, not all, the Logrunners did not seem to mind. That´s a small bird working the forest floor in search for food. And busy they were. 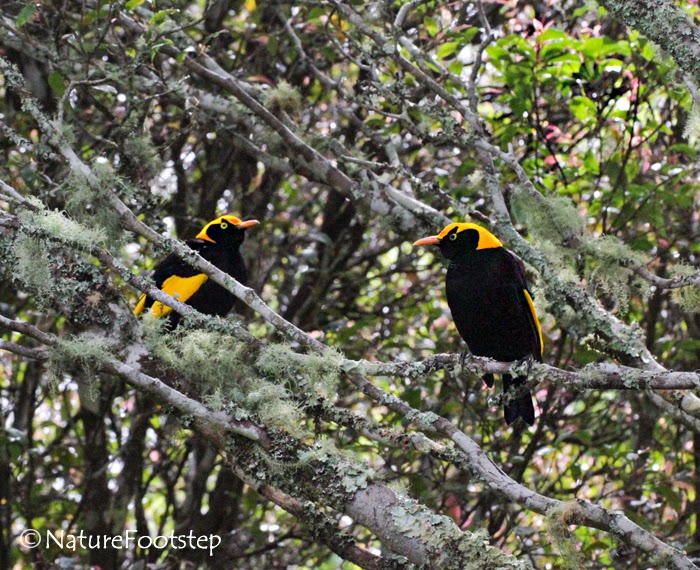 We gathered for lunch at a camping table with roof above as it was still raining. While we was eating a lot of Regent Bowerbirds came and started to steal our food. We were almost attacked by them and had to fight them off. And a Brush turkey tried to steal an entire plastic bag full of food. 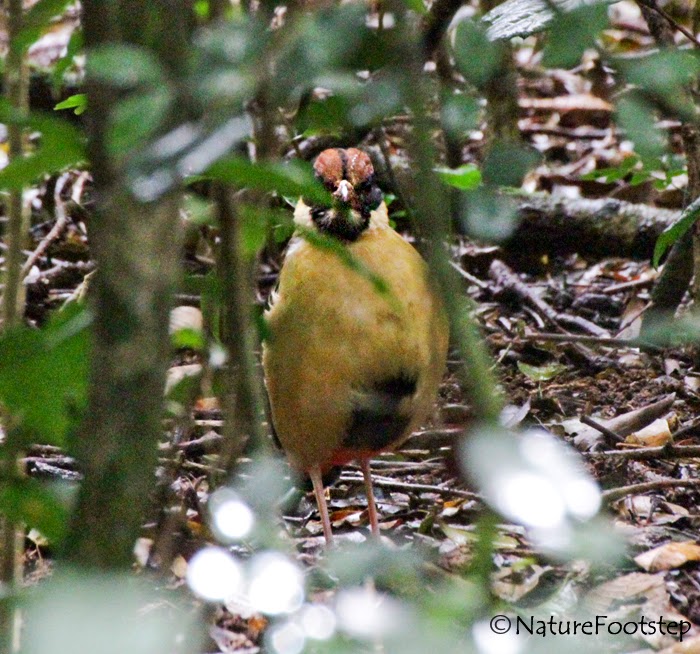 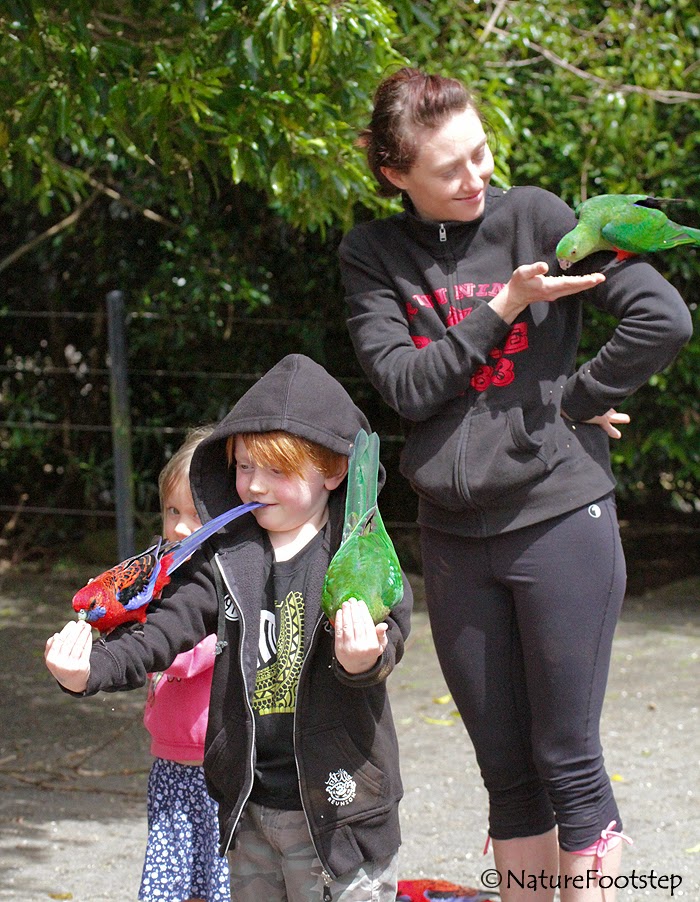 We spent another hour in the forest area and some time at the feeder they have where kids and adults can handle some parrots.
A little kangaroo was feeding on the lawn not bothered by any humans. 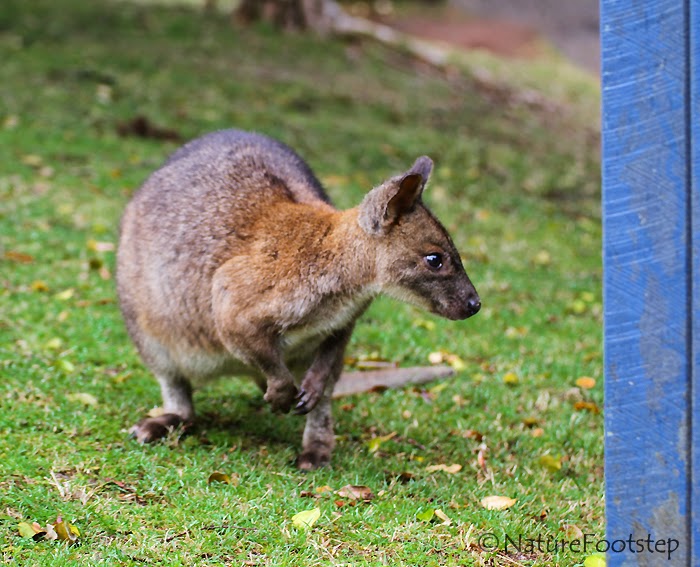 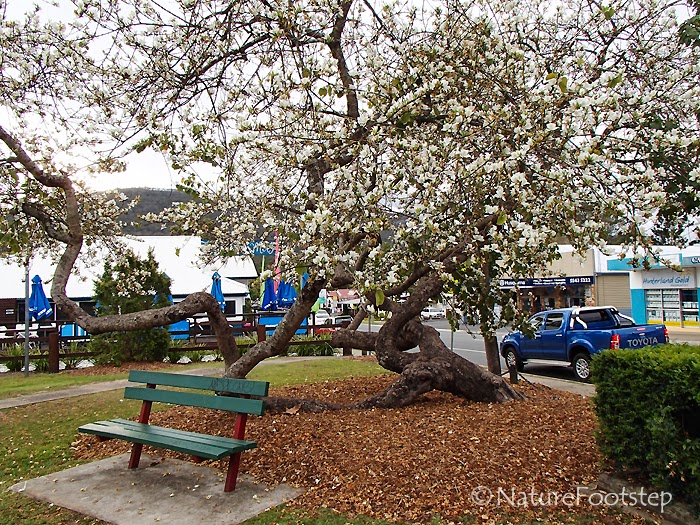 Then we had some coffee and went shopping in the store before we went back to Canungra. Arriving  there I took a walk to look at the place. They had a wonderful little park with trees in full bloom as they has springtime in September. Not fall as we have.

Dinner at the same restaurant as yesterday and then shower and packing for the last trip tomorrow. 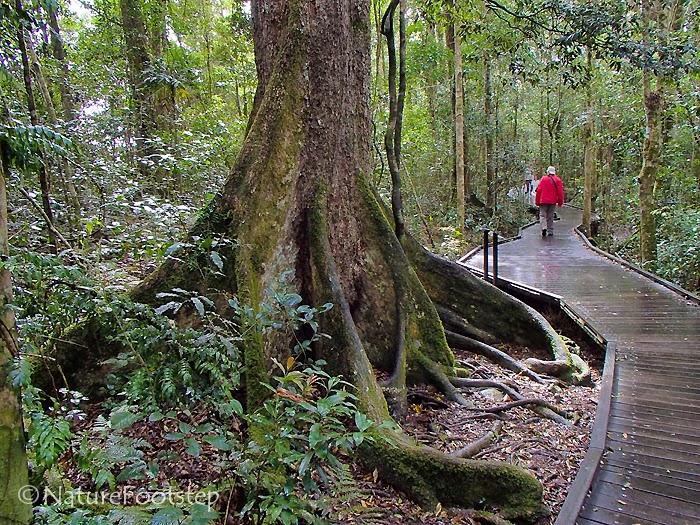 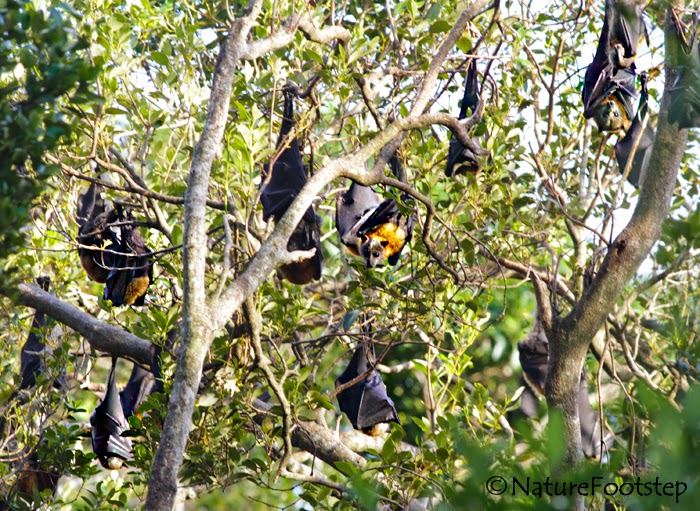 We met at 6.30 ready to depart from the motel Avlon Gardens.  But before we left the guide took us across the street to watch the flying foxes we had seen last night. One by one they were flying in to some trees in a park to spend the day sleeping hanging in the trees. There were 2 different species and they were much bigger then I had imagined. It was fun watching them. In this image I could count 11 of them. There was also a third species sleeping in the park. A man, probably homeless, was sleeping under a tree. The only one I have seen since I came to Q. 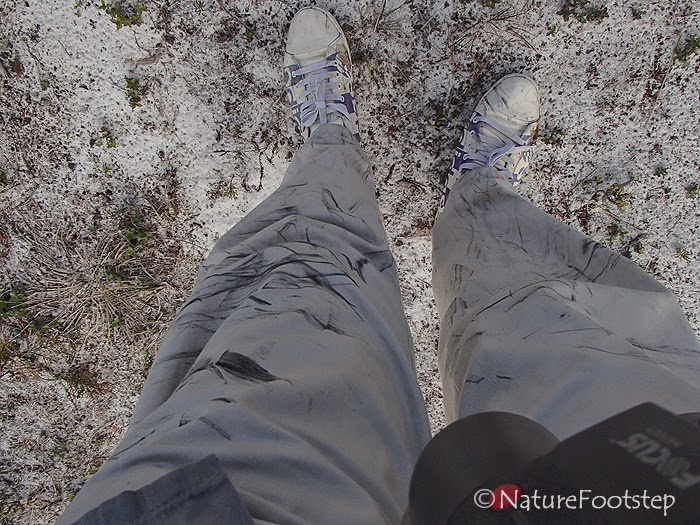 After that we drove to Lennox Head. New South Wales, a great place for surfers and caravan people. But that was not where we were going. We drew by the caravan park and stopped at an area with burned land. That´s the place we should investigate. The birds was great in the area but it was hard to walk as the burned vegetation was hard and pointy. And after a while we realised we were black from soot all of us. Among the birds were fairywrens, cockatoo and honeyeaters. There was also some exiting plants like the grass tree. Some of the vegetation is depending of being burnt more or less regularly. Interesting place even if we got dirty. After we noticed we got dirty we went out to a "road" that was easier to walk. And cool to see the unexpected color of the soil. 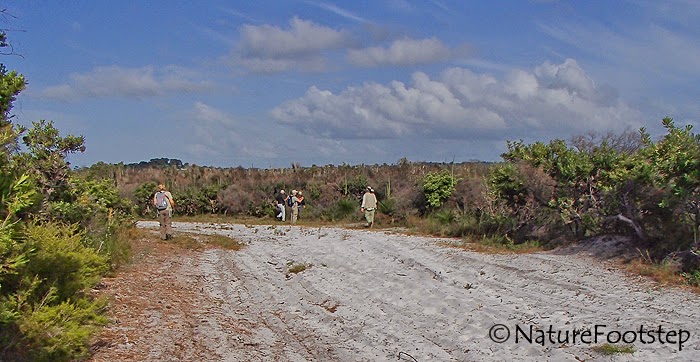 We took a quick look at the beach too. 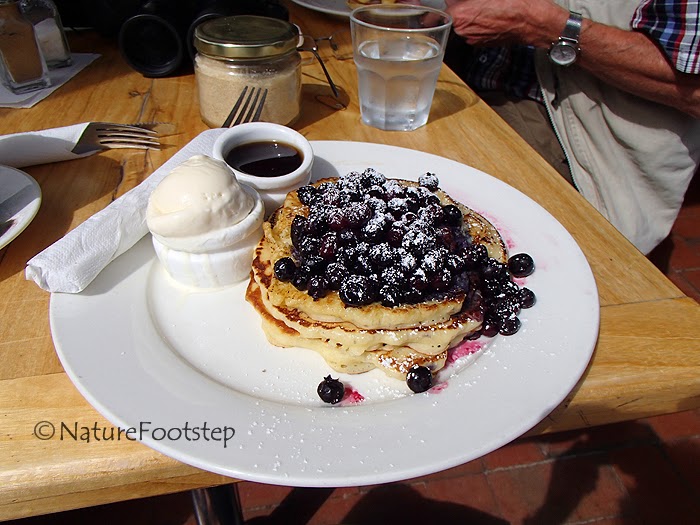 Now it was getting rather late and we had no breakfast yet so we went back to Ballina to have some breakfast at a café. Today I had pancakes for breakfast for the first time in my life. With blue berries, icecream and syrup. It was ok as we already been up for several hours. And it was good too! And....it is good to have a guide with you. He knows where the public toilets are :) 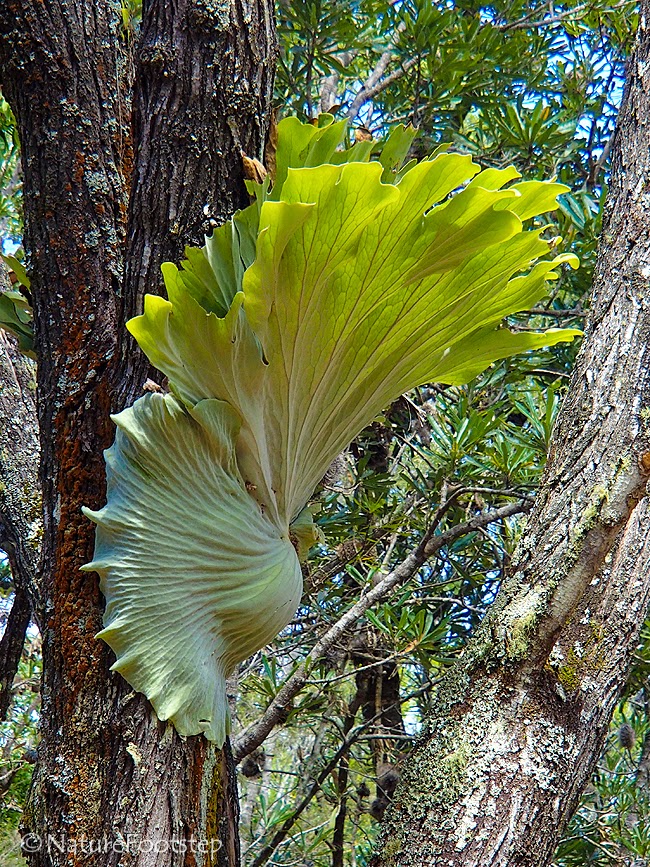 Now we went south over Richmond River to visit Broadwater NP. Here are more moorlands and forests. But we could not go in to the moores as it had been raining earlier and the area was flooded. So we went to the forest instead. Only a few birds bot lot of cool vegetation. And a nice walk. I was certainly attracted to this tree and it´s "decoration". We were looking for koalas here but did not see any. 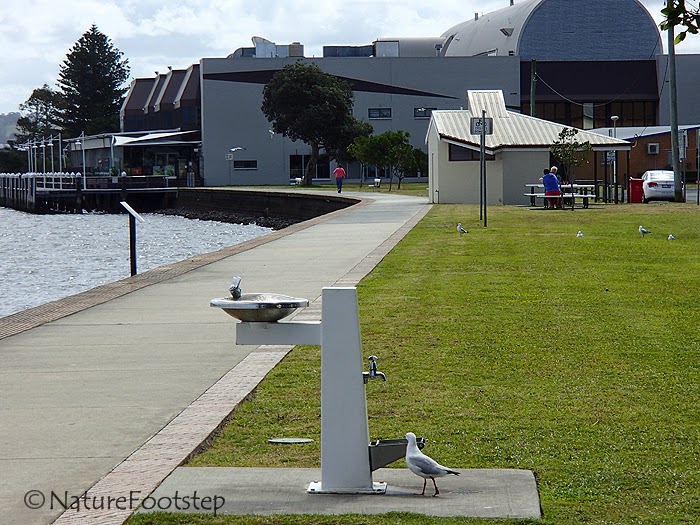 That took a while and at lunchtime we went back to Ballina and had lunch close to the harbour. As I was still full from that breakfast I only bought myself a Makadamia ice cream and I went to the water looking for seabirds on shore and surfers and boats on the water. And watching city life. And a gull taking advantage of human facilities. Drinking from the lover part of the water fountain. When the others were done they came to. For a little while before we headed up north after doing some shopping in a supermarket. No restaurant for breakfast at next nights motel. 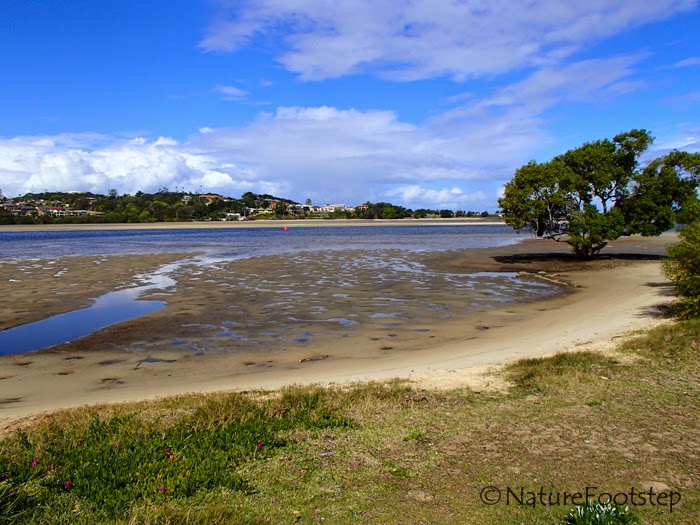 We visited a few of the beaches north of Ballina and was lucky there was low tide. At the first stop we had a beautiful Eastern Rosella posing nicely in front of us. 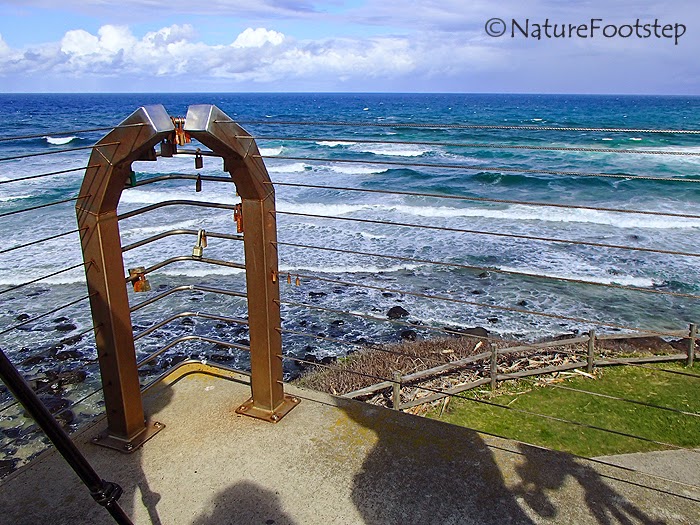 Next was Flat Rock lookput with a lot of locks all over the safety fences :) 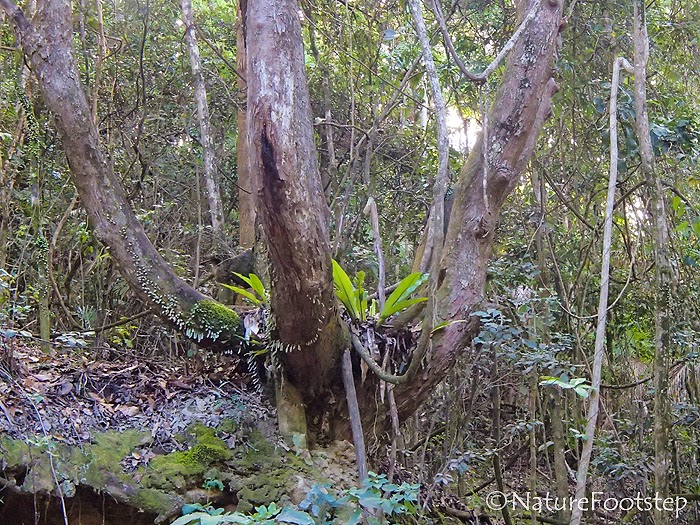 At 15.00h we started the trip to Canugra and reached the motel at 18.00. We made one stop during the trip. We walked along the road in a forest where I found thís beautiful tree. Broken Head NR
At the motell I was given room no 6 on the second floor without an elevator. But I got help bringing the suitcase upstairs. This is the last motel and we will stay here two nights. We had dinner at a nearby restaurant and we also went through the bird list after the dinner. Some people decided they would leave the cloths to a cleaning facility that was open but I decided I will keep the dirty trousers as a memory from the trip. And I still have them.

Then the usual shower and clean up the  shirt I was wearing during the day.
Uploaded the images and then took a cup of coffee before going to sleep.
Spent the night at Canungra Motel, Lamington NP Canungra 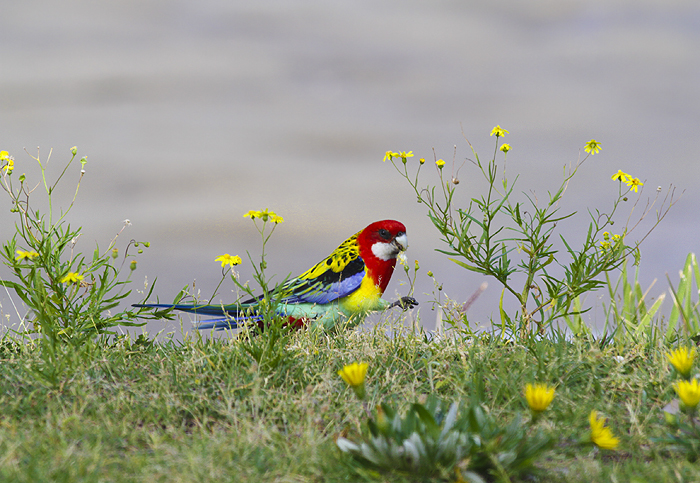 Linking uo with Our World Tuesday    WATW
Good Fences 46 There are two fences in these inmages, Both on the beaches. Image 4 and 9