Translate? See Google translation in the sidebar!
Click to enlarge 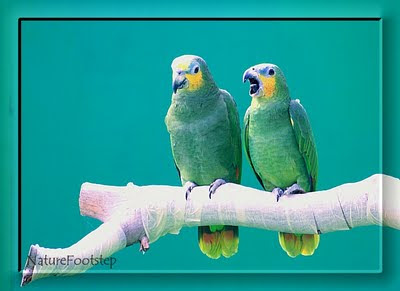 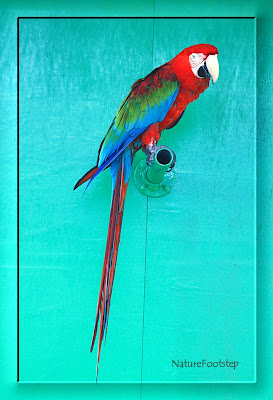 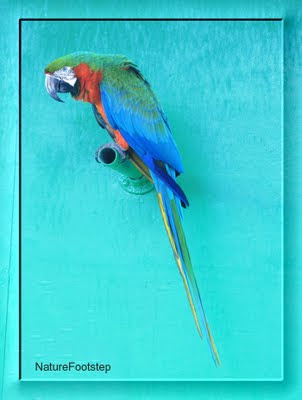 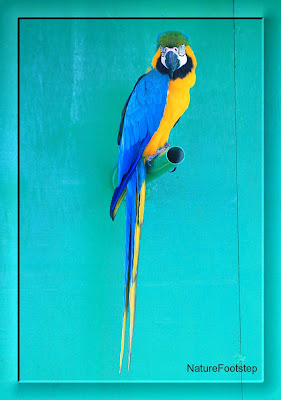 These guys and gals were the artists in a birdshow I visited in Malta last spring.

Click to enlarge All photos,
NF Photo 110617 at Storulvån in Jämtland, Sweden. :)

Storulvån 110617 Last day
Today we should meet a little later as we had to pack and clean the rooms before we left for the last hike on the mountains.

We woke up at 7 and started to clean up and pack. Then I had time for a short walk to see if I could get another look at the  Blue throat. 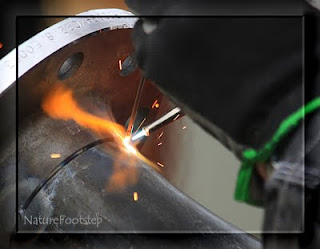 When everyone was done with breakfast, packing and making lunch package we gathered outside to leave for the last hike. While waiting I spotted a man doing some welding work. Had to take a shot of course. 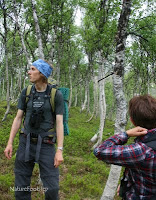 We headed halfway upside the mountain. Stoped at one place where Johan showed us how to see the normal snowlevel in winter on the trees. The trees were "marked" with a special kind of dark lichen at that point. It was as high as I am tall. :) Interesting to know.

Then we turned left to follow the river downstream. But we were higher up of course. :)

Todays walk was more on the same level, not much more ups and downs. Except for when we came to the hanging bridge. 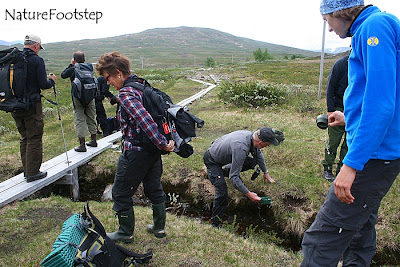 In places like these you don´t need to carry that much water, you can drink from the streams you pass.  It is clean good water. Really good actually. You never get that at home. Not even bottle water. Really, I skipped all wine to dinner this week and only had drinking water from the stream. Well, back to hiking.
. 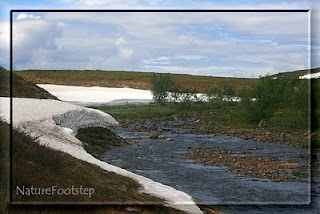 We passed the hanging bridge and enjoyed the scenery and rested a while. Beside the river was, still, lots of ice and snow left. It was beautiful and made some great shots I think.

We continued a bit and came to an area with small ponds. We chosed a place with a big stone to be our "camp" and left our gear there and went to explore the surrounding area. Not that much birds but nice anyway. We had our lunch at the "camp". And I took some shots of some plants. 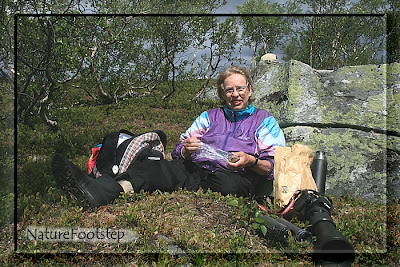 Then we left and after a while we had a shower coming down at us. I checked out some finches I spotted at a patch of snow. It turned out to be gråsiska - Carduelis flammea - Common Redpoll. And then I had to run after the others. 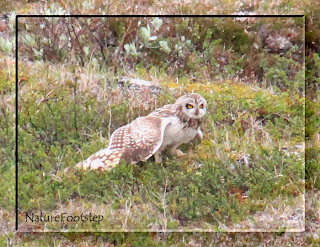 Then the highlight of the day. We were spotted by a Short-eared Owl - Jorduggla. It obviously had a nest on the ground because it tried to lead us off in other directions. It was fun to watch when it landed on the ground and played wounded. The right wing was very badly wounded I think. :)  It was really fun to watch.It was quite a show it put on And so our guide thought too. He had never seen this behaviour before. Nice! :) 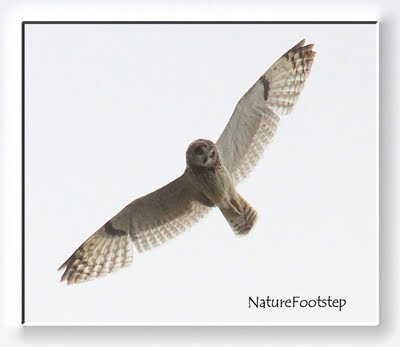 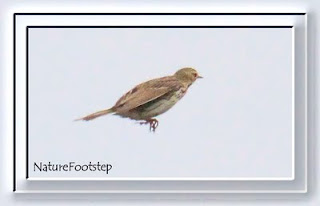 Soon after that I spotted a Meadow pipit - ängspiplärka flying over some bushes. I managed to get some decent shots of it flying.

We came back to the Lodge around 16.00 and dinner should be at 18.00 so I made another walk alongside the river. Today we had a lot of bread to choose from as they had had a bakery class for some people. Most of the bread was good.

After dinner we met at the balcony for a last birdlist and to write the usual note about how the stay had been.

Then we were picked up by a car at 19.30 that drowe us to the station. This time I had the bed at the ceiling. But it was OK. 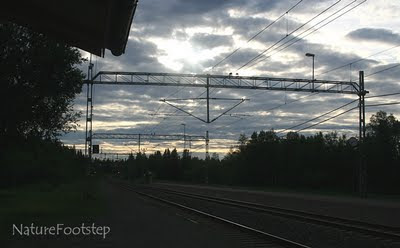 In the morning the train passed my city and stoped at Hallsberg where I had to waite a while for a train to go back to Katrineholm. I was home around 10.00 Saturday morning with aching legs. And lots of nice memories.

Outdoor Wednesday
Behind the Camera #7
Click to enlarge, All photos NF Photo 110616 on Storulvåfjället

Storulvån 110616 Storulvån
Today I woke up at 6. A bit too early so I stayed in bed for a while. Then I dressed and went out to find the Bluethroat again. And so I did. And got some good shots at it. I think I also managed to get some video too, but I have to check that out.
At breakfast I heard that a Redtail was singing outside so I got back for the camera and took some shot of it too.

At 8.45 we gathered outside and started the hike. We crossed the river and went up the hills. 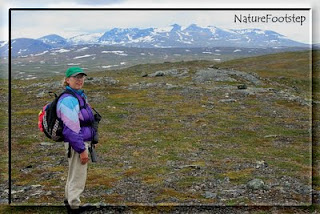 It was sunny and rather warm. The hike turned out to be rather difficult. But that was expected.
After a while we came to a spot with snow. And there was two European golden plover (ljungpipare). It started out good. :) The shot to the left shows me with all the gear I carry. It is quite heavy. But so far I manage. That point was the highest point we were at. 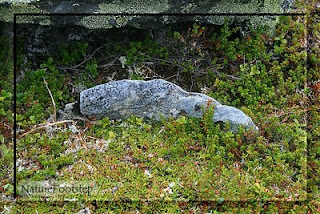 Then some of the guys found a Dotterel (fjällpipare)  and  close to that one I found a Rock Ptarmigan (fjällripa).  But after that it was not much birds. On the other hand there was a lot of nice tiny mountain/alpine flowers up there. When we were rather high up we took a break and our first coffee. Then we continued and it had gotten cloudy and started to rain. We walked throu a kind of marsh land, very wet but not so hard to walk on. There were mosses and lichens without the slippery mud beneath.

During the day I got some new spices. Long-tailed Skua (Fjällabb), Ring Ouzel  (ringtrast) and Short-eared Owl (jorduggla)  at StorUlvåfjället/Stuore Viekejalla. On the way back we passed the little lake Ulvåtjärn. A great place for fishing and swimming it is said. 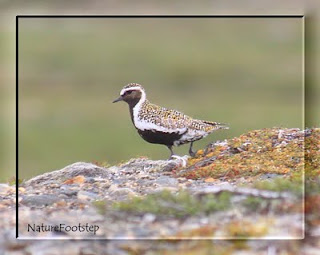 So I was happy. The entire hike was hard work and my feet and back are very tired. But it was beautiful and nice. We walked about 15 km in rough terrain. And went up to about 1000m above sea level. It is good to walk in a group like this. You see much more then you would if you were on your own. 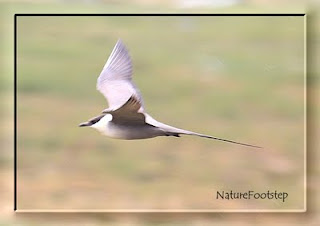 Photo of Fjällabb - Long-Tailed Skua in action. Trying to chase us of the nesting area

The dinner was quite good but fish again. I am not that good at fish. I don´t know what they do to it because the fish is slippery. :(

We went throu todays birds list at dessert as it was not so many today. 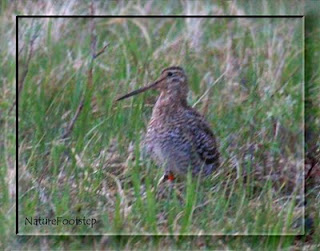 At 21.45 we did meet again. This time to go out and watch some Great Snipes dancing in the night. (dubbelbeckasin som leker). I am tired but I will go anyway. It might be the only way I can ever be able to se anything like that. I would never have found that place without Johan to show us. We were in the end of the season so it was not that intense. But we did see and hear a few male birds singing and dancing. There is a science project about this spieces as we were informed of  yesterday.


.
Dubbelbeckasin/Great snipe  projekt
Back at the Lodge at 01.00.The sun is still up.  And tomorrow is the last day. :) 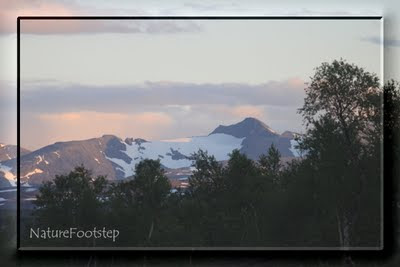