Went down to the beach before breakfast as usual. Amused myself with watching surfers for a while. Not much waves today but still nice to watch. Most of the surfers here are beginners. 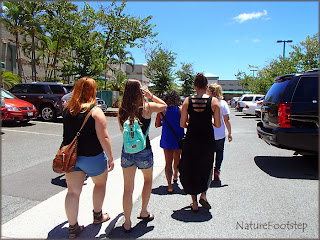 After breakfast I hit the bus to the house wher my relatives are. When I arrived they were barely out of bed. My day is much longer then theirs it seems. We were going to another shopping center. Waikele Premium Outlet, I think all but one of the girls joined in the tour. And, for once, I actually bought a couple of things. Strange, why am I always behind the gang? But here I see five woman but six shadows. My grandson is hiding. 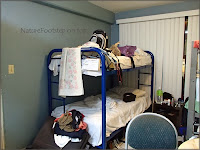 It was sunny and hot and everybody stayed in shops also to get out of the heat. After a couple of hours we met at McDounalds to grab something to eat. At 5 we headed back to the house. The girls was about to cook but as I was still fed up I took the bus back to the hostel and the beach for a swim. And just to enjoy the place, and of course take some shots.


There are some new arrivals at the hostel. Among them a woman for a change. Nice! For tomorrow I plan to do a hike on my own as the family are going for even more shopping. And I had just enough of that for now. 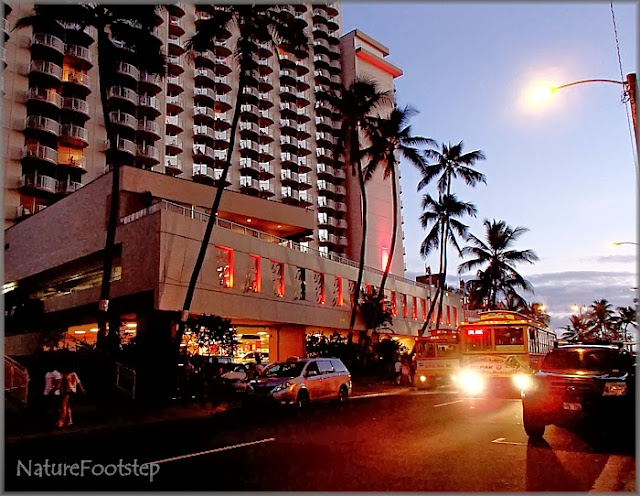 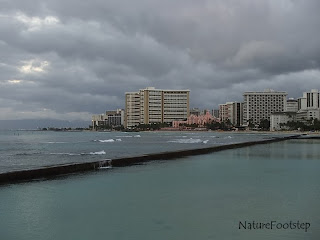 I woke up at 3 as Linus started to move in the bed below me.  He is going to Big Island and has to catch an early flight.
I slept another 2 h and then went up to be an "early bird" at the beach. It was mostly clouds and the sun behind the mountain range of course. But there was fairly much people up to watch it. Some already surfing.
Lots of the homeless was sleeping close to the sanitary facilities at the beach. Think it was good somehow, They could stay clean and go to the bathroom. They did not disturb anyone other then they kept their stuff around. There is also a lot of activities on the beach. People having meetings and gym sessions and running like crazy.
At breakfast I saw a one of the doves landing on jars happily eating from whatever was in them.
After breakfast it was time to take the bus to Bishop Street to meet with the family. There was a little misunderstanding. I thought we were going to the beach but ended up shopping. The beach would be later on in the afternoon. We was shopping at the University at first. I found a nice backpack in rainbow colors. But the family screamed NO, you can´t buy that one. When I wondered why they said everybody will believe you are a homosexual! O, gosh, I´m old. To me the rainbow symbol is still Greenpeace! 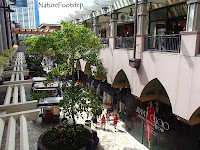 Then my granddaughter went to her class and the rest of us headed for Ala Moana to keep shopping. They seem to like it.
Finished with shopping time was rather late but we located the Ala Moana Beach Park and checked it out. It was sandy and hot with no shadows so not a place for me really. Nowadays I like shadows. 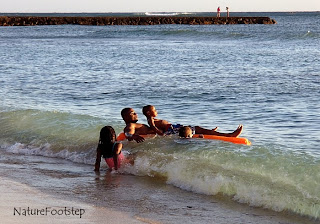 Back at the Hostel I grabbed my things and went swimming on Queens Beach. As it is so close I only bring the most necessary items with me. The towel, key and the little camera for sunset shots. The place is good for sunset shots. Then I had to do some shopping and find something to eat.
Family fun to the left! But not my family.


Linus is back from Big Island and obviously had a great time. He was able to walk down into the crater of the volcano so he was quite happy.

I was writing on the computer when people started to arrive and suddenly it turned out to be a beer party in the room. I did not mind but did not join in as much either. They were mainly discussing politics and that is not my favourite topic. 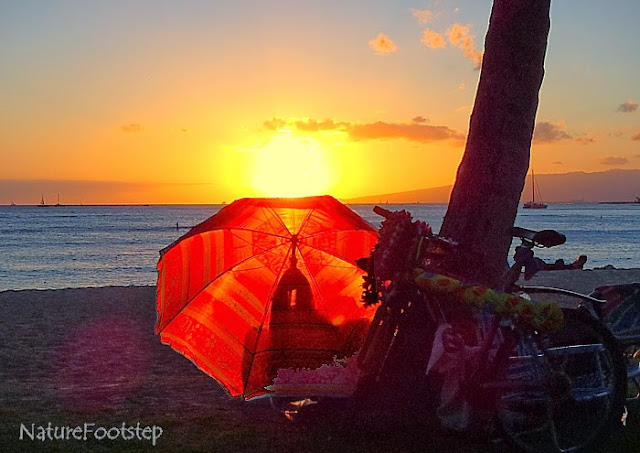 Today we were going on a trip on the east coast and up to North Shore. After breakfast I brought some food with me and took the bus to the villa where everybody stays.
﻿
Around 11 we started out. We headed for the coast and crossed the mountainrange. Our first stop was at Pali Lookout where we had a beautiful view over the coast and over one of  my granddaughters schools, Hawaii Pacific University (the school is located on three locations). We continued north and passed the harbor where the school has their boats. Weather was cloudy and we had a bit of showers. Seemed to be common in this part of the island.  Pali Lookout video from youtube 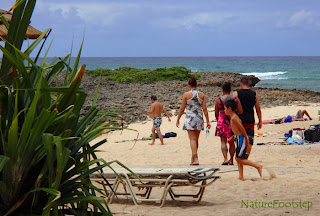 We made a stop at a beach My granddaughter liked.Turned out to be Turtle Bay.  It was a sandy beach for swimming of course, but also a part with rough, sharp lava where we explored tiny creatures for a while. Not that great for the sandals as the lava made cuts in them. With one step we went from warm sand to sticky, sharp lava.
The location was great but the line for the toilet was not. 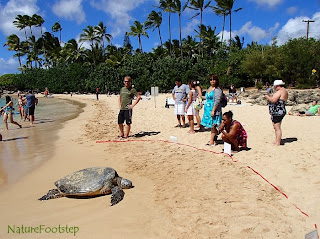 We continued north and found the Turtle beach where the Green Turtles used to be. That was cool. They lay on the beach or swam close in the waves. Very nice to watch. Responsible personnel arranged a red rope around the turtles and people was not allowed to disturb them. 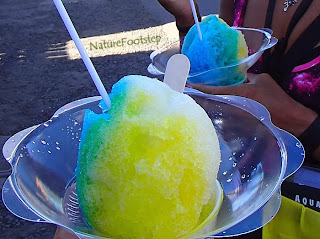 Then we continued to a diving shop in
Haleiwa Town. Parts of my family wanted some equipment. Then, it was time for Shaved Ice. It is what is says. Shaved ice with colored flavors of your choice. Rather delicious! It seemed to be a very popular place.

Afternoon was now late and we had to rush for DOLE Plantation. And Pineapple ice cream.
We walked around the garden and shop for a while and then finished off with ice cream. In the garden they have these gorgeous trees growing among the pineapples. I don´t know the name of them so I would be happy if anyone could let me know. I have seen them once before in Costa Rica.


On our way back we went to Best Buy to buy some local phones as we live in different places that would be nice. Then I was brought back to the hostel and the evening walk at the beach. Then I got good use of the phone at once as I realised my camera was under the seat in the car. And the small one low on battery. So no more shots today.
Sky Watch Friday    Travel Photo Thursday   Ein stuck himmel
Travel  photo Mondays
NOTE! Comment form for visitors outside GOOGLE
Labels:  Resor, travel, trip, journey, Sverige, Sweden, sky, photo, photography, Monica Johansson, NatureFootstep, nfphoto, NF_photo, nature, natur, fågelskådning, birding, Hawaii, Honolulu, resa, travel, family, familj, O´ahu, Oahu,  Hawaii Pacific University, Pali, Turtle Bay, Turtle beach, DOLE, plantation, turtle, shaved ice,
Posted by NatureFootstep at 5:41 PM 16 comments:

A year ago at Dakhla peninsula in Morocco 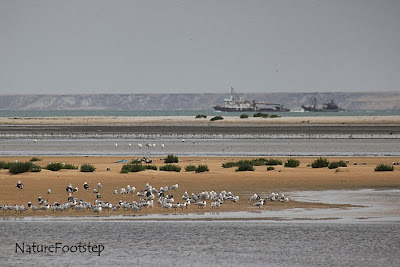 A year ago I was in Morocco and at the southern part of Dakhla peninsula. There was lots of gulls and terns at the low tide area and in the back some flamingos. And...as it turned out to be, a wreck.

130814 in Honolulu Beach and Shopping

I woke up at 6 so I had three hours to spend before breakfast at the Hostel. I spend them in bed writing on my computer. My granddaughter will be in school and my grandson don´t want to go shopping. That leave me and my daughter. She will take the bus and meet me at the hostel. 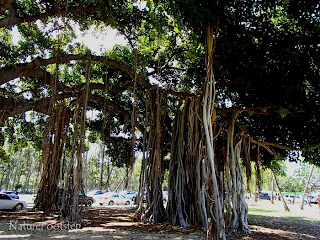 After breakfast, coffee and sandwich, nothing fancy here, I went out for a walk. Passed by the area around Honolulu ZOO area. It seem to be a Zoo where parents bring their children. Then I headed for the beach with my camera and spent some time shooting birds and water. There are a lot of big trees that looks very interesting. Later on I realized they were some kind of fig trees. They give shadow when the sun is too hot. And the birds loved them. 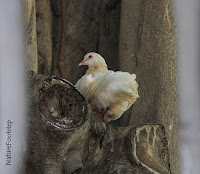 My daughter arrived as planned at noon. Without having eaten anything at all. So, we headed down the main street and when we found an ice cream shop we decided it was good enough to be "breakfast". I took one with blueberries and strawberry in it. Very nice!

After that we headed for "down town" Victorias Secret, or rather VS i Waikiki. And I was shopping underwear! Never in my life did I think I should be able to shop at Victorias Secret at my age. 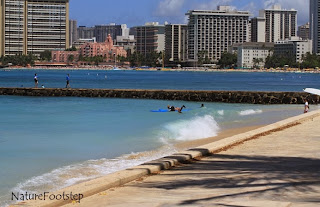 I also bought a pair of flip-flops as I now have 4 blisters on my toes. Think that might be a better choice for my feet in the hot days of Honolulu.
Being done with markets and shops and whatever, we went down to the Waikiki Beach and sat down just enjoying the time.
Then we took the bus up to the house where the girls lives. It took an hour. And it is a complicated route. Will take time to get used to. A soon as everyone was present we had dinner. Then I had to take the bus back to the hostel. I had memorised the place where I would get of but, of course I was too late seeing the building and had to continue for a while. The bus did not take the route I thought it would. The driver suggested I continued to the end station and then back. So. I got a round tour trip.
Back at the Hostel I talked a little with some of the guys and then took a shower and wrote a bit.