Translate? See Google translation in the sidebar!
Today I was going to Hornborgasjön with a group called Rapphönan - Grey Partridge. It is a network for female birders. So, this is a few days when I will spend time with woman only. And birds of course. 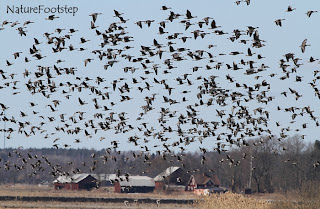 I left my home about 9.00h friday morning to go to Kvismaren at first. That is a Bird Observatory about 1,5h by car from where I live. I stoped at the first lookout and was surprised. No men whatsoever but I found 3 woman birding. One of them is now  a friend on FB.
The park observatory area was filled with geeze. I  think I never seen that many geese at one time. Then a few swans and a Sea Eagle. But not much else. 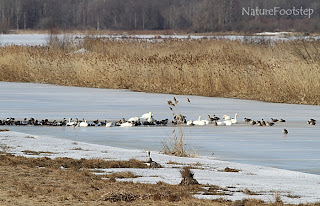 I took this shot from the lookout and it is interesting to see the birds gathering where there was just a fraction of open water.
I took a cup of coffee and then I continued west.
Note. When I was going home on sunday evening the area was empty. Maybe ten geeze or so was there. All others left the area. Going north I assume. 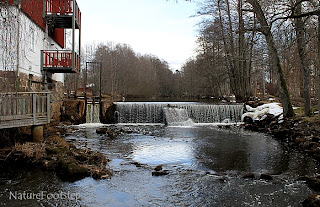 I arrived at the Hostel, Herrtorps Qvarn, around 15.00h. It is a very beautiful place and I checked it out for a while and then had the lunch I brought with me. There should be birds in the stream bot for now I did not see any. This place is an old flour-mill.
I was supposed to meet with the group ar 18.00h so I took my car and went to check out the main area of Lake Hornborga Nature Reserve. 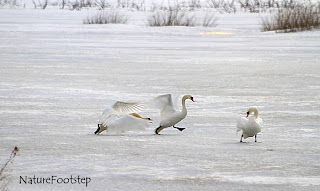 I realized this is a very beautiful countryside and had to make several photo stops. :)  I was a bit disappointed as the lake was still covered with ice at that time. It means not many birds. But there was mute swans looking their best in the back light. :)
﻿﻿
﻿
﻿

Then it was time to go back to the Hostel, meet with the group and have dinner. After dinner we had a person talking about the area and it´s history and birds. Very nice.
I stayed in a room with 4 other woman. It was a bit cold in the room so I did not sleep well. But I did not mind as I realised I had a window bed and could see all stars through the window. A little like when I was little and in my grandparents house. :) 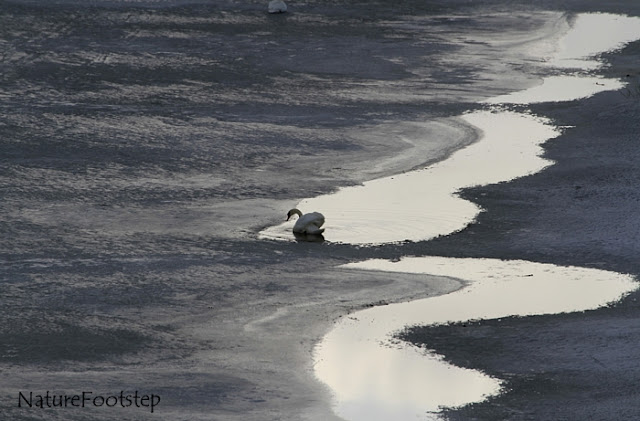