Translate? See Google translation in the sidebar!
Hornborga Lake with Rapphönorna day 2
﻿
﻿After a chilly night we got up at 5.30 to have breakfast and to gather a little food to bring with us. I had a few minutes to spare so I checked out the little waterfall at the side of the building. No birds but a glorious sunrise, mist and all.
﻿﻿﻿﻿
At 6.45 the bus picked us up and we headed for what we call the Trandans which means "Crane dance". The place is located at the south point of the lake. They built a center for visitors and have a great view over the birds. The birds always stop at that location as they are being fed. It is good both for visitors/tourists and for the locals. The birds are not feeding on farmers land.
We spend all morning at the location watching Cranes, geese and mostly Whopper Swans. A few ducks here and there and two lapwings. After making an overall check of the area I went back the road we came as I had seen there was a very nice morning back light. I stayed put until the sun had raised so the glory was gone. There was also Tundra Swan. They said those are easy to spot. 4 was obviously seen. But I´m not sure I really saw any.

﻿
The "dancing" of the cranes happened occasionally. They merely jumped up and down flapping their wings.

At lunchtime we headed a bit north to
Löfwings Ateljé. An artist has a restaurant and are showcasing his artwork. Lovely nature art displayed both in separate rooms and on the walls. Seeing the nice art and enjoying a very good meal was a hit. And so was the company at the table. Especially Lotta and Hanna. Our guide and her daughter.   :)

After lunch we headed for the lake and was divided into two groups. One group had free time to stroll alongside the lake looking for the Mute swans on the ice. Those I watched yesterday. Or trying to find some smaller ones in the bushes. But not many of these this time of year. The other group went to join a ringing session. After a while we changed groups. The little Blue Tit did not appreciate the procedure at all. Looking angry and tried to hurt the guys fingers. :) 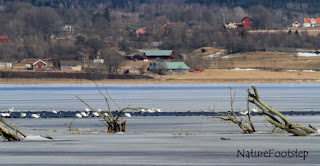 Later on we change the original plans and headed to the other side of the lake as there was a little open water. The place called Utloppet (the outflow), so named as this is where the water exits the lake. Now we could see that actually some ducks and gulls has arrived to our frozen country. (This was the beginning of April.)


After a long day in the fields we went back to the Hostel for an evening meal. We call it pyttipanna. You can put whatever you like in a frying pan. The food disappeared more quickly then the staff had estimated from a bunch of woman. But adding some extra bread that problem was solved. 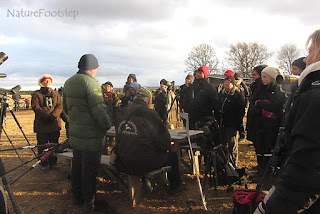 But the day was not over yet. We had a lecture to attend at the Trandansen so we headed out again. Alf and Clas had been counting the cranes for decades and that was what the lecture was about. But, honestly, the place now bathed in glorious evening light and it was hard to stay put and listen. At least for me as first and foremost is a photographer.

When we came back to the Hostel we were all tired. After a short session on what birds we had seen most of us went to bed.

Today I learned the difference in size and appearance between the Whooper swan and the Crane. I never realized before how big the swan really is. The two birds are almost the same in height but the body stays on completely different levels. Long legs on the crane the body stays high and the bird seems slender. Short legs on the swan makes the body close to the ground and gives a very heavy appearance. :)

We are to be early birds again tomorrow.