Translate? See Google translation in the sidebar!
I got up rather early this morning as I was about to go north to see lekking Western Capercaillie (Tjäder) and Black Grouse (Orre). I would be in a hiding for two nights. One night for each bird. That was the plan.
I left at 9.00h to go to Surahammar where I would meet up with the guides from Nordic Safari. Then we went further north to the Pensionat Udden where we had lunch and also gathered the hot meal and drinks for dinner in the hiding and for breakfast, still in the hiding. It was a beautiful afternoon, a bit chilly but sunny. The lake outside the house was still mostly frozen. But a few ducks, golden eyes, was swimming there. 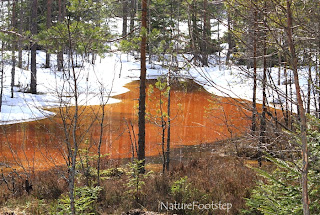 We left for the woods to see if we could find tracks from wolfs. It was a place called Klotens Vargrevir - Klotens wolfterritories. We did indeed find some tracks but did not see them. There was also very nice thawing pools of water so I was busy taking shots. We did also see a beaver hut, but of course, not the beaver itself. Done with the Kloten area we checked out some more open land and was able to find a few early migrating birds.

At 18.00h we was at the area where the Western Capercaillie -Tjäder was supposed to take place and we checked out what had happened there lately. You could find droppings and feathers and other signs of the birds. Besides me there was one man that should stay in a hide too so I was not to be alone in the wilderness. 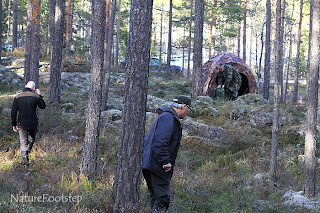 A cup of coffee before entering the hide. I picked a tent for me and Anders picked a tent nearby and at 19.00 h we closed the tents. Not to be opened until 10.30 next day.  Now I was busy arranging my stuff and to have the dinner I brought with me. A bit chilly but I managed. I tried to hear if there was any sounds of birds outside but I did not hear a thing. Later it started to rain and got really windy. Not fun at all. I went to sleep around 22.00 but awoke as I was sliding of the madras to the cold ground. Then I slept until 4.30. Still raining and windy and not a single bird. Had some breakfast but still no birds. Our guide, Lars, was guessing the situation and arrived early to pick us up. Most of my stuff was wet as the rain had dropped in to the tent. At 11 we were back to Udden. Disappointed!  Some more people was coming for the afternoon and we was served a nice lunch. Then we looked at a video about wolfs.
﻿﻿As they said it would be very wet to hike to the site for the Black Grouse I decided to go home and come back next week. I did not have knee high rubber boats so the guides thought I would probably get wet. I did not want to be wet staying in the tent another night so we changed the arrangement and I went home. But will make another attempt next week.


For the readers. Not to worry. It all worked out fine next time. You´ll see.