During the week I decided to try both birds again so when I went to Nordic Safari and  Udden this time my goal was the Western Capercaillie first night and the Black Grouse the second. 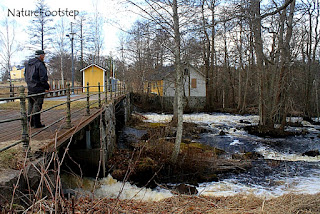 Started as last time. The ice still covered Hjälmaren so not much to see there on my short break. I arrived at Pensionat Udden in good time before lunch. I was lucky to find a  Black-throated Loon  (Storlom) in the lake. After the lunch we looked at the wolf movie and a presentation of Nordic Safari. Then we headed out in 2 cars. Some people would go to the Black Grouse and I to the Western Capercaillie. Before going to my hide we were checking some other places in the forest. And we went to Uttersberg to meet with Fredrik at 17.00. Uttersberg was a nice place with a stream and a museum. Then we headed for the area where I was last week,  Klotens Vargrevir.  Fredrik too had the same bad luck last week and wanted to try again. We picked our hides and closed at 19.00.

Fixed the sleeping bag, arranged my stuff  and had my dinner. Looking out now and then. This time I had a squared tent and my head at one wall and feet at the other. Not much for taller people then me. When it got dark I finally spotted a bird down the road. Yes, this time will be ok. At least I´ve seen one and heard another during the evening. 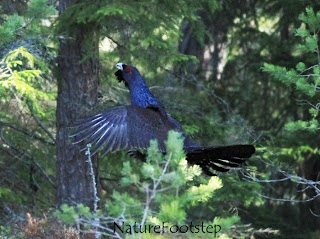 From my tent I had a view to the other side of the road and there one male was lekking for 3h. Jumping up and down and pacing back and forth. With no female to join him. Poor thing.
On the moss area below there was frost and to see the birds in the sun was quite nice. I had one male with two hens and then a few other males here and there.  One male flew up and lekked quite close to Fredriks hide and I had a good view of it between some trees.
﻿﻿﻿﻿﻿﻿﻿
﻿
﻿

I was lucky enough to see a mating even if I did not understand it at once as they where partly hidden behind a tree. Not before I saw the hen slip away I understood what had happened. The shot is rather lousy but still a proof of what I saw. Photography was not an easy task. The trees was in the way most of the time and also made it difficult to choose settings. Too dark or too bright? Hard to get it right. So, take a lot of shots and hoep for the best. 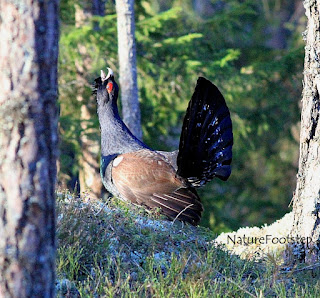 It took a long time before things calmed down enough for me to think about breakfast. But what the h-k. I wasn´t there to eat. 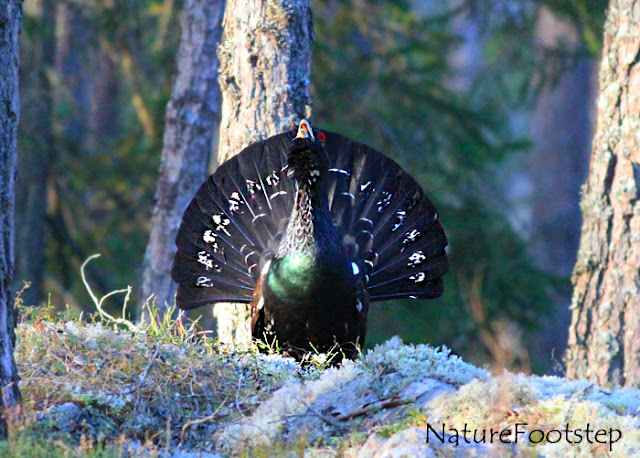 I was amazed when I saw this shot, there is different patterns on each tail feather. I wonder if that is a way of telling the difference between them? Like a fingerprint.