Translate? See Google translation in the sidebar!
Coming back to Pensionat Udden from the night with the Western Capercaillie (Tjäder) adventure I was really pleased. And I could only hope my shots would be OK. 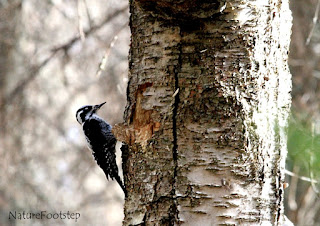 Now there were several people joining us for lunch. And again we was served a great meal from lamb. This time for the Black Grouse ( Orre) we were 5 people who would stay in hidings. Me and two couples.  We left in 2 cars after lunch. We went to Ekopark Färna. As we had a couple of hours to spare we walked in teh forest. Hopefully we would find Three-toed Woodpecker (Tretåig hackspett) After some time we did find a pair. At first the female was sitting high up in a tree impossible to get a shot at. The male took off. But after a while, when we were about to leave she came down and it turned out there was a nest too. A lifer for me. :) 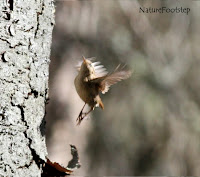 We also spotted a Winter Wren (gärdsmyg). I was happy about that as I did not have a good shot at one in freedom. Only from a banding session. A great time in the forest. :)


﻿
Around 16.00h we readied ourselves for the hike to the Black Grouse lekking area. As my rubber boots was not knee high I took off my stockings and rolled up my pants to hopefully avoid getting wet while going through the moss.  I also had the camera equipment stored in my backpack for safety reasons. Only the little one in my pocket. It was a hard hike for a woman like me. First we walked the forest, then an area with short bushes called Marsh Labrador tea (skvattram), dry and sticky, but smelled rather nice,  and I got a lot of stuff in my boots. Not fun but I managed. The big problem came after that. We had to pass a stream and had to be careful not to slip on the slippery bottom. Then we came into the moss. Water all over and so soft. The boots got stuck in it making every step a challenge. It took a little less then an hour to get to the hidings. I grabbed the first one I came to, and was lucky, as it turned out later on. 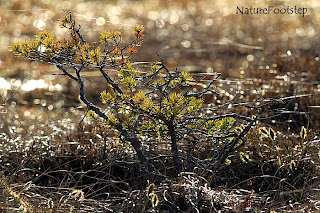 The two couples had one tent per couple and I had one of my own. It was placed on a platform above the moss so it was dry. Sun was shining and it was nice as I arranged my stuff. Looking out of one opening in direction towards the sun I spotted some nice grass and spiderwebs so I got myself a photo session in the back light of the setting sun. Then I had my dinner before it was time to close the hide and eventually go to sleep.

I woke up after a while as it was getting cold. I had to put on everything I had to stay warm. Not much more sleep that night. At 4 I started to hear noice outside but it was too dark to see anything. I reached for my water bottle. And guess what? It was frozen solid. No wonder why it was so damned cold.

Well, at 5 it was light enough to see the Black Grouse outside the hides. There were several males and a few females. And the ground had also frozen so there was frost and ice on the water pools. But the black birds was really gorgeous against the white surrounding. Lots of action going on among the males. Not boring for a second. There was a few spots I liked and tried to get shots of birds there. And when the sun came up coloring the treetops yellow it was perfect. 3h of fun watching them. A final fight between 5-6 males ended the session, sadly that was hidden from me. It happened behind some bushes.  Then it stopped and they all flew off into the forest. 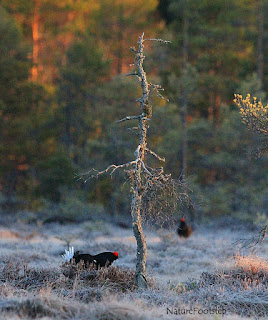 Ok, breakfast! And then Mattias came and picked us up for the hike back to the road and then Pensionat Udden. My boot got stuck once and I stepped out if it but no water came into the boot. We were again invited to a good meal before we headed home. As I was tired I had to go rather slow not to risk anything. But I made a detour to the lake, Gnien, as I planned to visit the first day. But the place was empty so it was nothing but getting some air before continuing back home.

I´d like to say thanks to the guys at Nordic Safari for making this a great adventure despite the first troubled days. Now I am happy I did indeed go home after that first night last week. The two nights now was worth it all.
Nordic Safari 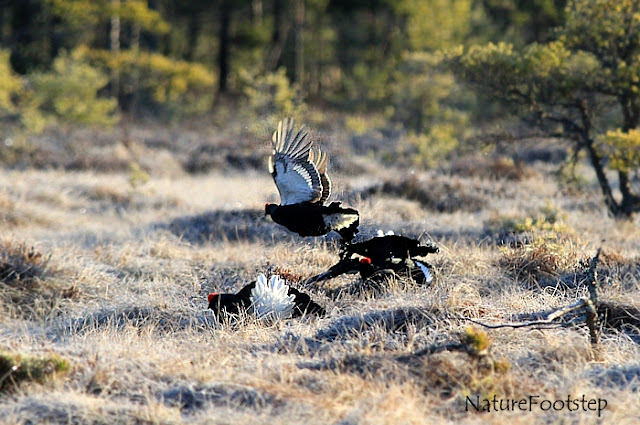