I was about to write a summary of the weeks in Honolulu. But then I realised I had a quite interesting day taking train and buses to Arlanda airport. So here is my first day of the journey. 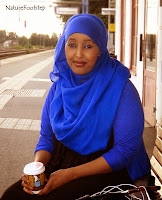 Already at the bust stop I met with two Muslim sisters. One of them had a blue scarf and her makeup was toned to it. At the train station she was left alone and we started to talk. She lived in Stockholm and was about to go home. I asked if I could take her picture and was allowed to do so.

There was a group of people also waiting for the train. They seemed to be from a theater about to put on a show. 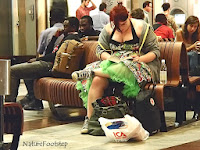 At the Central station in Stockholm I had to wait for about an hour and I spent it taking shots. What else was there to do??  Thinking of Birgitta's "Street Photography by woman", on Face Book,  I took a few shots while I waited.

Heading for the bus for the last transport I had to go upstairs in an escalator. While standing in it I had a chance to look around. And what I saw made me go back down for another photo session. As I
had about 15 min I had time for that. 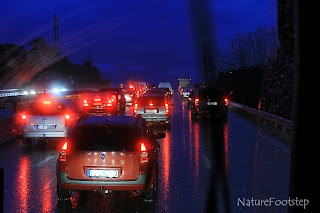 Outside it was raining. A lot! Not many people that was on the bus so I took the front seat. It took some 45 min to go to Arlanda so I had time to take some shots from the bus as well. :)

And then it was as late as it could be so I took a nap on a couch.

Our World Tuesday
NOTE! Comment form for visitors outside GOOGLE