click photo to view with Lightbox
NF Winged 105    Sky Watch Friday
NF Photos 130920-22
I was going to Hjälstaviken to meet up with some women from the network Rapphönan. We were going to be birding at Hjälstaviken, a small lake/wetland with, usually, lots of migrating birds resting.
I left my home early as I wanted to stop at the southern part of the area before heading for the meeting. I had figured out that there should be Bearded Reedlings ( Skäggmes) in the reeds. I had never seen them and I really wanted a chance to do that. And I figured it would be easier alone. 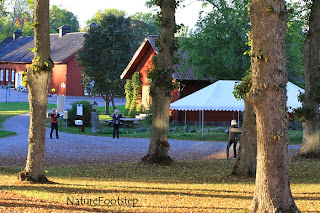 I arrived at the parking place around 15.00h. Talked to a man that told me how to get to the footbridge in the reed. He told me he had just seen them. That sounded promising. But did I see them??? NO! I was there for two hours and did not see them. I  went back to the car in a bad mood continuing the journey to our hostel. Biskop Arnö. A beautiful small island in lake Mälaren.

We all met and got our rooms. I shared it with a woman named Maria. There were a nice sunset and some migrating geese (link to my birdblog) travelling the sky. We gathered at the dining room for coffee, tea and bread that was arranged for us. Our hostesses Gigi and Mariann informed us about the days ahead. 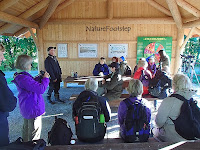 To be a birding trip we slept late. Breakfast at 7 and leaving at 8h. There is a birding tower at the east side of the lake. That is where we headed.  But that was not a good idea. e were greeted by a man that informed us about the area and how it is taken care of. He also said that birding in the morning is hard as it is back light and everything turns black. So he recommended us to change plans and come back after lunch. Which we did after having a short coffee break.
Then we headed for Parnassen and the reed I had visited yesterday. Now we heard a few birds but did not see them. A few other warbles was in the area as well. And in the stream some geese and ducks.

Back to Arnö for lunch! And then back to the tower. Now lots of geese was in the fenced areas closest to the body of water. This afternoon we spotted all but one of the geese species normally visits Sweden. Not bad. A few ducks and waders also in the area.

A Sea Eagle passing by causing the geese up into the air.
We were back to the hostel at 17.00h when dinner would be served. A good meal it was. :)
Done with that it was sunset outside so we took a walk in the area. 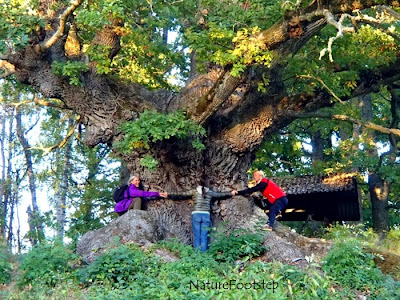 Bishops Oak
One activity on the evening stroll was to measure the Bishops Oak, approx 550 years old. It took 6 Rapphönor to close the ring around it.
We gathered in the diningroom again and Gigi showed us some images and had arranged a quiz.
130922 Sunday 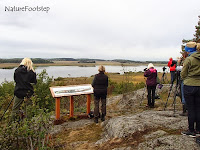 The same procedur this morning. We headed out at 8.00. All packed and with our own cars as we were not coming back.  We went to the place called Hjälstaviken. Not far from the boardwalk in the reed. There is a hill with a beautiful view of the area so we were going up there. But not me. I decided to head for the reed once more so I left the group for a while. And now I was lucky. Even if it was only one bird,  I saw a beautiful male Bearded Reedling and got shots of it. Also heard a few others in the reed. But did not see any other then the male. After a while I went to join the group at Jungfrulunden (lol Maiden grove). 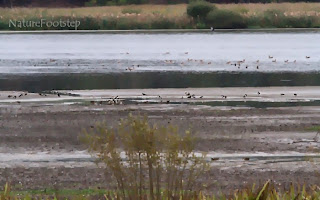 Short after I met them again we had an alert that a rare vader, Buff-breasted Sandpiper (prärielöpare), was seen at the tower on the other side of the lake. The group decided to go there. As we expected a lot of cars coming after the alert we parked some of the cars at the place were we should have lunch. Now it was cloudy and a hopeless situation for photographs and it also turned out that the bird was far out in a dry area in the wetland. I did see  it but got no shots.

How on earth are you supposed to find a tiny wader in this shot. And this sandiper is really tiny. I can ID a few lapwings but that is about it. I used the 400mm lens. 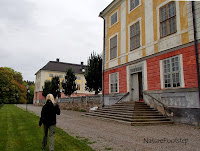 Before lunch we had time to take a look at the castle nearby. Ekolsunds castle. A nice but worn out place. Even if they seemed to tend to the gardens. The lunch was superb and the sun came out again. Allowing me a few shots. Hm, I wonder what the little camera did to this shot?

After lunch we sent back to the reed area and a hiding that was newly constructed there. Mostly grey lag geese and cormorants was there. It was almost time to leave so I said good bye and headed for the boardwalk a last time. Hoping to be alone. Now I walked slowly as I heard  them. Finally it was 3 of them in the reed but I could not get them on camera. And then, of course, all the other woman came on the boardwalk. I raised my hand and they stopped dead behind me. Most of them were able to see 3 of the Bearded Reedlings as they flew over to the other side and disappeared. So, what can I say, if they did not come I might have seen the birds in front of me, maybe also a female, but then the other would not have seen any. 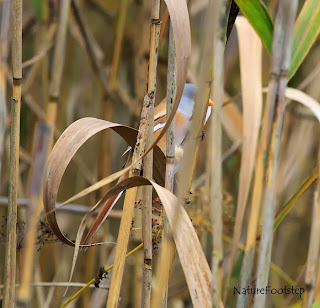