click photo to view with Lightbox
Sky Watch Friday   Ein Stuck Himmel   Travel Photo
NF Photos Oahu  130811-130902
Starting Monday 130812
I met my daughter and grandson on Arlanda Airport Monday morning. The plane was airborn at 10.50, a bit late, and headed for Chicago. In Chicago Ohare we had two h between planes and had to go by train to another terminal so it was a little bit nervous but we did good. Next plane left in time and we were going straight to Honolulu. That was quite a distance to sit on a plane. Especially as the plane was cold. And we did not expect that. And no food served.

Well everything turned out well and we landed in Honolulu according to plan at 18:53 local time. It is kind of fun. Looking at the watch we had been travelling 6.5h. But the real travel time was about 20h.
We were met by my granddaughter and one of her room mates and went to their place first as my daughter and grandson would stay there. The house was crowded with people so I would be staying in a hostel at Waikiki beach. So that was our next stop. And after bringing my stuff in we went for a walk and to find something to eat. And enjoyed some street entertainment.


My first impression of the town was bad. But it seem to grow on you. The hostel seemed not as good as it did on their website and the town was crowded with homeless people. We had dinner on a place my daughter had like her first time in H. And after that I left for the Hostel and the others for the house. We had fixed some bus tickets so that would be the main transportation during the stay.
﻿﻿﻿﻿﻿﻿﻿﻿

The Hostel turned out to be OK. It was a 8-bed room and my room mates was all guys most of the nights. I was there for 19 nights. And the others was starting school or was travellers. 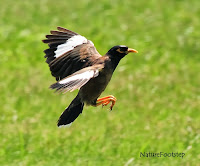 After a few days I had a routine. I went to the beach in the morning. Then I met with my family or went out on my own. Lol, my family went shopping, I went birding!
This bird is a Mynah. Seem to have a habit of talking.

Most of the evenings I was at the beach at sunset. I bought something to eat and drink and then I sat at the beach watching sunset and people. There was a hotel over the street and they used to play rather good music too. And Friday at 20.00h there was fireworks. So I can say I was entertained.
﻿﻿ 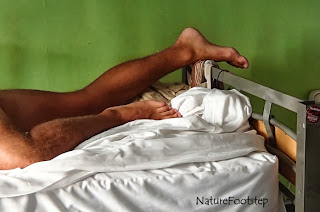 As time went by I got used to the homeless. They did not disturb anybody and they were tidy enough as they had access to the toilets and showers at the beaches. And getting used to having young men as room mates was quite easy and turned out to be fun.
The view from my bed when I awoke. :)


﻿
The highlight of this visit was the day we went dolphin diving. What a day! None of us will forget it. And the days we had the car and went out exploring the island of Oahu was also great. My family especially enjoyed colored Shaved Ice. And the Pineapple ice cream at Dole plantation. And the turtles. We also explored my granddaughters schools. And was guided around most of it.

After three weeks it was time for me to go back home while the others would stay another two weeks. Last day we were at the beach and my daughter and granddaughter was surfing. And then we was at the market buying me a dress. That is very unusual. :)
Around 17.00h we were at the airport and I had a very long, lonely trip back home. About 20h this time as well but in days it was a day and a half. I left Saturday evening and was home Monday morning.