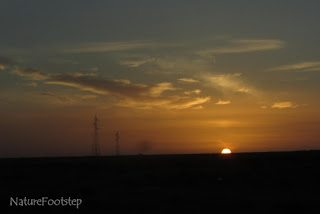 Woke up at 6 to pack and be ready for breakfast at 7.00h. Today we was sea birding at Several places along the coast south of  Tan-Tan Plage. We left Hagounia Hotel and headed out at 7.08 to a place 10km south of Tan-Tan Plage. It was quite nice to be there as the sun rised. 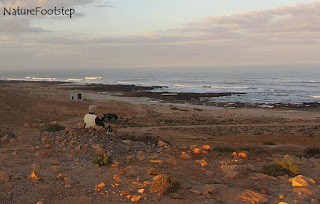 There was some rocky cliffs below us and also some kind of small settlement. The ocean was quite wild with huge waves roaring the beach. There was some seabirds and vaders and some Little Egrets (silkeshäger). I waved to the co-driver to come and take a look in the spotting scope. He seemed to like it. We also saw some Great Cormorant (storskarv) and  Thekla Lark (lagerlärka). The cormorant looked quite different from what I am used to. It had it´s winter plumage and I had never seen that before. We left this place at 8.40 when the sun was well up. 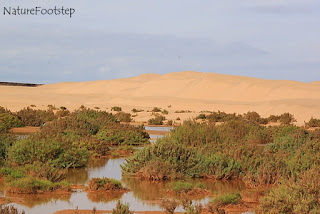 Stop 2 Oued Chebika at 8.55.  This was a, now almost dry wetland as it was low tide, with the road going over it. We birded both sides and I also took a lot of sand dunes shots. There was a couple of Black Wheater (svart stenskvätta) who was very nice. And some large gulls. Not much vaders though. A grey heron and some Little Egrets (silkeshägrar).

And... I almost forgot, Flamingoes! After that we ended up in our first police control. But they was satiesfied with the paperwork done by Anders so we were fast continuing. 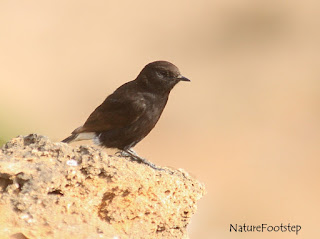 Stop 3  Oued Fatma Is an inlet that was flodded now. There was a lot of Audouin´s Gull (rödnäbbad trut), Blackstart (svartstjärt) and Black Wheater (svart stenskvätta). We went up on the hill overlooking the inlet. Wild water here as well. 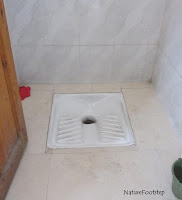 Stop 4  Oued El Waaer or Ouaar. Pick one. It was not that much here. Then we made a short stop at a gasoline station. And went to the loo. We did not see many of these but a  few in the south region. At least, this one was clean.  :) 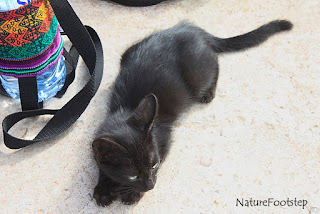 Stop 5  Oued Khnifiss was an old camping ground and maybe also military or fishermen. There was some activity going on there. It was a lagoon with a sand dune at the farther side. A few people seemed to live there and they had a lot of cats. A lovely black kitten among them. This one liked to eat my yoghurt. It was lunch time now.  :)  There were quite a lot of birds in this area. Probably because of the lagoon. There were ibises, storks, vaders and birds of prey. And I got a shot of their local wagtail. :)


Stop 6 Layounne, almost at the end of todays trip. A nice desert river with a lot of reed. This was a birders wonderland I guess. The river never reached the ocean. I got myself some new species here like Glossy Ibis (bronsibis), MarbledDuck (marmorand), Black-Necked Grebe (svarthalsad dopping) and so on.  Loved it.
Laayoune Flamingo Lake

The shot shows Glossy Ibis flying over an area of Urban Saharan Architecture that we passed by later on as we neared our hotel. To bad we could not stop. It seemed quite interesting.

Then we headed into town to find a supermarket. After some search we found one rather close to the hotel we should stay in. Sahara Line Hotel, I took a shower and it worked well as soon as I figured out how it works.

We met down stairs at 19..00 for the birding list of today and then dinner. This hotel had a menue to choose from so I ordered chicken and it was good. Lol, and on this hotel we could get a bear to the meal. :)

I have got a coold and my lower lip is swollen. My nose running. Not fun! Some bug is running loose in the room attracted to some gum bears I have so I had to "hide" it.

Tomorrow will be a transport day down to Dakhla. About 600 km shall be covered. We will be stoping here and there of course but no long birding session.  Breakfast is served from 6.30 and we shall leave at 8.00h The surrounding area is rather boring now so maybe I´ll put my birdbook in my backpack.