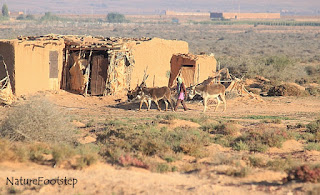 Woke up at 5.30 and departure at 6.00. Problem was that the staff did not wake up until 6.00 so breakfast was delayed. We had it in the lounge sitting in sofas. But it was ok when it finally arrived. Our guys was stressed and tryed to help with placing cups and stuff.  They wanted to leave as soon as possible. This was the only place where I actually found a, dead, .....
We were packed and left at 7.00h. First stop was a few km south of Guelmim at Oued Sayad. We walked alongside the dried waterbed. At first it was all dead. Probably due to the chilly morning. But then birds started to wake up. Then it was quite interesting. But what I don´t understand is why the Morroccan people throws plastic trash all over the place. That is not fun.

This settlement was located across the riverbed. I was aiming for a bird when I saw the women and the donkeys. The bird flew away and I did not see it anymore. 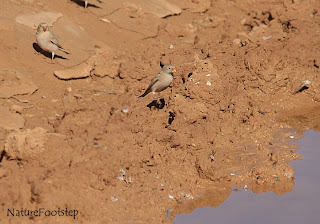 Stop no 2 was Oued Boukila. That was a large dry riverbed. With lots of bushes. It was very hard to walk in it at least as I was carrying both cameras and the tube. Most of the visible birds was larks. But on the other side of the road was a lot of dromedary camels (or Arabian camel) and some birds and  dragonflies at a waterhole. That was a fun place. The Trumpeter finch (Ökentrumpetare) was a very nice bird and there was about 30 of them at the most.
We was there for a long time and was back to the bus at 11.30 for the short drive to the next stop. I was a bit disturbed as we were told we should have time for lunch break. But in practise it was only 10 min in the bumpy bus. No time to rest an aching back and legs. And my toes start to feel like blisters are coming. 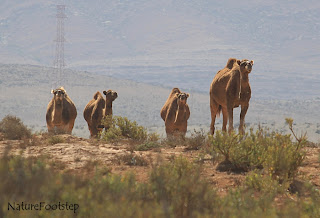 Well we headed out on a really big plane, just called the Lark Plane,  to search for diffferent larks. This time I did not bring the spotting scope as I was already to tired for that. But I managed without it. Sometimes the guys would let me look in theirs. 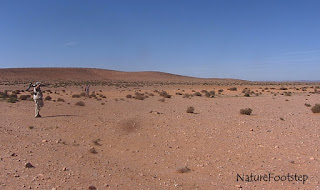 It was late when we arrived at the bus and continued south to Tan-Tan Plage. I went to the back of the bus to sleep a while and to rest that aching body. All those hours in the sun and dry land and bushes had taken it´s toll. And I am a bit distressed and envy of Anders pics too. Seeing his shots makes me really see the bad condition my camera is in. He has a Canon D7 with a really great lens.  :(


There was no Supermarket in Tan-Tan plage so we had to walk around in different shops to find what we need for tomorrow. Then off to the Hagounia Hotel

I got a room on the first floor with a view over the ocean. A bit spoiled by powerlines. But you can rarely get it all, can you?

I took a shower whitch was quite hard here. But I managed. Then I tried to connect with internet and it worked. We met again at 19.00 to go through todays birdlist before having dinner. Yea, dinner. Strange. First plate with lots of rice and sallad. Did not eat much as I was expecting a main course. BUT the main course was just a big plate with lots of fried fish and octopus. What a dissappointment! Luckily there was bread on the table. To finish off we got some fruit. And I ordered a cup of coffee.

Now I am writing of course. And I have to tend to my blisters.

Tomorrow we will have breakfast at 6.00. A bit later then ususal. And I look forward to our first stop. We are going to a waterbird location. :)
Mer om Södra Marocko  och Västsahara på NF Photo Marockos fåglar
More about South Morocco and Westsahara on NF Photo    Moroccan Bird species


Posted by NatureFootstep at 9:48 PM