I woke up at 5.30. Packed my bags and went to breakfast at 6.15. We were all finished and the coach left hotel Ryad Mogador Gueliz and Marrakesch at 7.10. 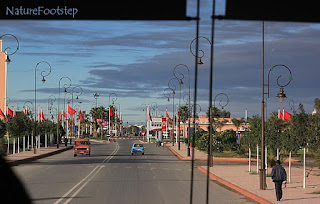 We made a short stop at Chichaoua, Marocco to buy some water and bread for lunch. It was some hills on the way but not the mountainrange I was hoping for. When we stoped to buy breakfast there was some people begging. I´m not really comforting with that. Morocco seem to be a very divided country, both modern as well as the old way of life.  Lots of cars and busses then there are still lots of donkeys in the traffic carrying people or gods. There is a lot of litter all over the place. Especially plasticbags and bottles everywhere. I saw my first Spotless Starlings (Svartstarar) at the little marketplace. 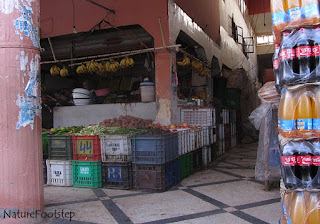 We bought whatever we needed for the rest of the day in this little shop. They had youghurt and bread and lots of fruit. And candy and coke as you can see. Very important. :)

Belive it or not, but it started to rain. So when we did stop to streach the legs at 10.00h,  it was wet. We walked for a while among trees but did not see much birds. But we did see a yellow scorpion and a shepheard guarding sheep.

At noon we had reached the coast and turned south. Our first birding stop was at Tamri north at the coast. We walked around in a desert like country. A few sanddunes and some sticky dry bushes. We saw a lot of Bald Ibis (Eremit Ibis) and Cream-colored Courser (ökenlöpare). It was fun. At that time the sun had finally arrived. We stayed there for about 2-3h. 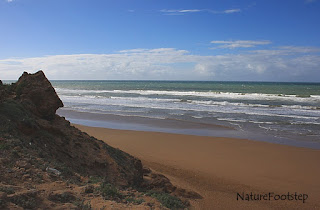 Then we moved a bit south and stoped at a beach to check for birds and have the lunch of our choice. My choise was to eat later on the bus and use the time taking shots and looking around. Lots of Bald Ibis (eremit ibis), Audouin´s Gull (rödnäbbade trutar) and ducks was there and a wonderful beach with roaring waves. It was very windy so staying away from the cliffs edge was wise. 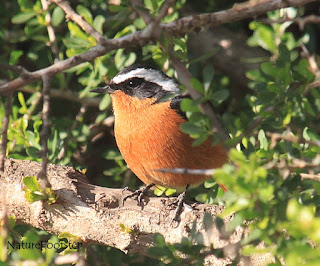 Then we continued south and went to a lighthouse, Cap Ghir or Cap Rhir, and a small village. Spelling in Morocco is very complicated indeed. Same thing has a lot of different ways to be expressed in writing.  I took a lot of shots at the rocky beach. The guys tried to bird with the scope but I did not even try it. It was too windy.   We saw a pair of Moussier´s Redstart (Diademrödstjärt) among a few other birds.


We continued to Agadir and got there around 17.30. We found a supermarket and bought what we think we need for tomorrow.

We arrived at The hotel Tulip Inn Oasis around18.00. I took a shower and then we joined at 19.30 to go through the birdlist and tomorrows scedule. As usual the others had seen a lot more birds then me. 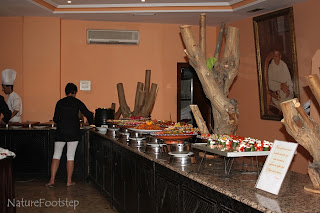 Then, finally, we had dinner. It was a buffé and some of it was good. I had beer and a cup of coffe to it. The only hotel that offered beer. And this table in the shot was just the starters. Then there was main course and dessert. Lots! :)

Tomorrow we shall have breakfast at 5.30 and leave the hotel at 6.00h. Ouch, early again.

Posted by NatureFootstep at 5:52 PM