Woke up at 6 and went for breakfast. We left the hotel at 6.40 to go to that waterhole we investigated yesterday. I think it is called Gleb Jdiane. Hoping for some nice hens. Sandgrouse (Flyghöns) . 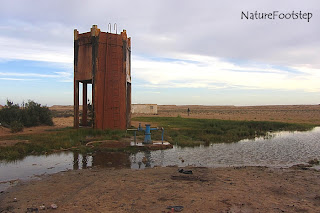 When we arrived it was already daylight but a bit chilly. No birds to see at all. We walked around for a bit and then there came a couple of Northern Wheatear (stenskätta). Then a wagtail. Then it was quiet again. We went slowly to the little hillock Anders had seen. Waited another halv hour and then we heard a sound. Looking up to see the first flock of Spotted Sandgrouse (Ökenflyghöna) arriving. But it seems like they were suspicíous about us being there as they sat down far away from the water and stayed there. It took about 45 min before they started to move. We moved too, a bit further away from them to give them space. Later on a small group of Crowned Sandgrouse (Kronflyghöna) arrived. Now groups also were flying overhead but did not land. As a birder it was frustrating but understandable seen from the birds point of view. They were not used to see twolegged creatures in the area.
Finally we decided that we will leave as they obviousley did not trust us. We closed in to the 4 ones on the ground to get at least a good sight of them. But then the rest started to get busy. 5 of them landed at the water so we were able to get good shots of them before we left. In that moment a Little Egret (silkeshäger) came and landed on the tower. Typical, right! We are leaving at 10.30 then they come. 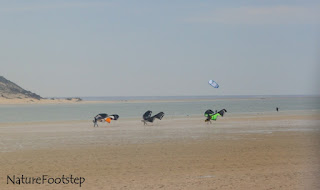 We headed back to Dakhla Bay camping. Not much to see but people having fun. As the tide was really low so we continued. A bunch of terns got a human visit.


Then we went to the hotel to let a few people off. And we had 5 min to go to the loo. And now I got angry. The cleaning staff had left all keys in the doors so every room was open to who ever wanted to go there. And no cleaning staff in sight. I don´t call that secure. Anyone could have been there to steal my computer that was easily seen in the room. I lock my room because I want it to be locked. And so I told the reception personel. 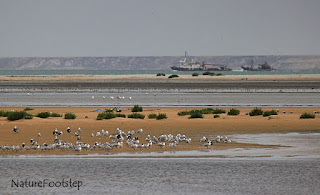 We went south to visit that area once more. First stop was at a lighthouse but that place was dead, no birds. Last chance for birding at Dakhhla was down at the south end where the fishing camp was.  I walked down to check if there was any vaders while the others were looking for seabirds. There was waders but so far out it was no point in trying to see what it was. Probably the same ones as the other day. But I did see a ship and a wreck out there. I sat down by the road and ate my lunch and waved at men passing by. They seem to be very friendly.  Then I stayed a little longer before I went back to the cliffs where my fellow birders was looking for seabirds.

The driver and the young codriver also came out and had some fun with my spotting scope. I bet that before I leave they will be turned into birders.

Birdlist at 7 in the lobby. Dinner at 8. Fish of course, what else? Starter was probably octopus and the main course some fried fish. Washed up some clothes as this hotel is the best one for that purpose.

Tomorrow we are going north again. Breakfast from 7 and we are leaving at 8. Hopefully! 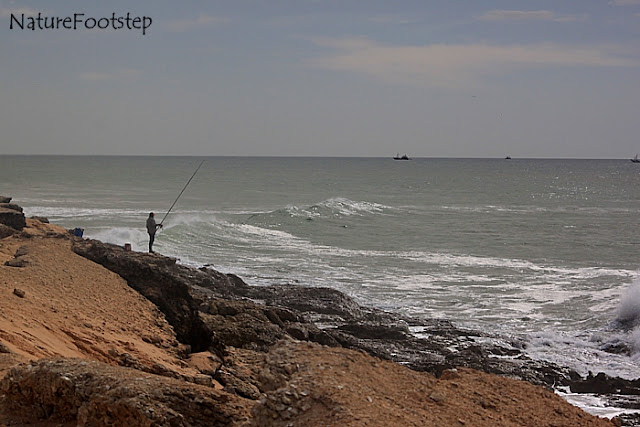