Woke up at 5,50. Been up twice during the night. There is a police man standing in the corner of the block. Checking out on us?? Who knows! Probably he did as the clerk later on told our guide that "we are being watched".

Breakfast should have been served at 6.00 but that was the time when the first member of the staff arrived. They don´t really bother do they? So, we were late again. But not that much. This time we had a young man guiding us out of town on moped.  Our portier had whispered to Anders that the Morroccan police are watching us. And they sure are. They seem to think we are there to make an uprise among the Western Sahara people. I have no clue if we ever met any of them. I don´t think so. 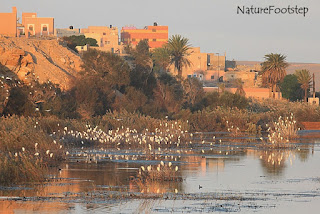 Well, we headed out of town the northern route, but as we were about to bird at the bridge the young man on moped lost us when we turned in on a parkinglot. But our driver horned on him so he turned and came back. The three of them, gteh guide and our drivers seemed to have a good time as we birded the area. We had a good time birding and shooting pics as the sun rose. Lots of great shots on stilts and cattle egrets. 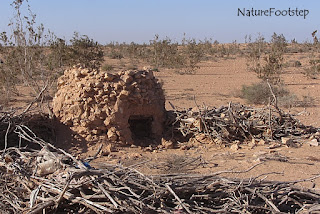 Well, our escort leaft us on the other side of the bridge and we continued north. Our first stop was at a bushy desert area 50 km north Laayounne. Hoping for warblers but was dissappointed. The area was almost empty. At least on birds. Some ruins was still lingering. Leaving the place at 9.55h 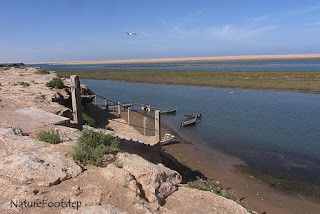 We were a bit more lucky at Kniipfiss(?) the fishing and camping area with the cats. There was a lot of birds. Vaders and others. Spoonbill (Skedstork), flamingo at teh sand dunes further out and Eurasian Curlew (storspov) calling a lot. We left at 13.35 to go further north. We were passing by an area where they produced salt. But we did not stop there. 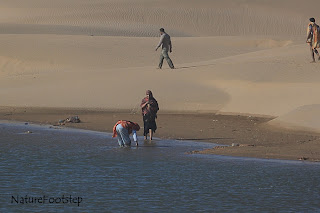 Eventually we did check out the three riverbeds we visited on our way south. But now it was high tide so lots of water there and hardly no birds apart from gulls. At the last one a car  arrived with 2 couples of morroccan people. They started to vade over to the nearest island of sanddunes. The two young women had some trouble with the skirts as they did not want to get wet. They had a lot of fun and the youngest women waved at me to follow. I could not do that of course. :) 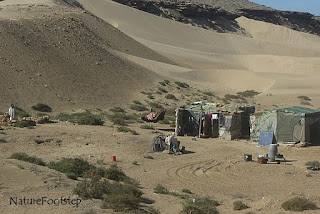 Close to Tan-Tan Plage we made a final stop to look for seabirds. Nothing much again. But some photo opportunity for me. This time two cars stoped at our group wanting to know about birding. Maybe we are turning the Morroccans into a birding people. .) Also two cars of policemen stoped and checked us out. And now our driver starts to get annoyed. They know us and have all details since we went south. So why bother us now?

It is a bit strange as we went along the coast. Here and there in empty areas is a house or tent. Men sitting at the edge fishing in the middle of nowhere. You have to wonder where they live. And why they fish so far from villages and people. Do they live by themselves in a tent supporting themselves with only fish? Guess I´ll never know. And at one place I saw a woman heading straight into the desert. God knows where to because nothing was visible to give a hint. 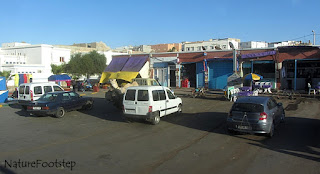 When arriving at Tan Tan Plage we went shoping but as we were late not much was open. But we got what we needed and then we went to the Hagounia Hotel. The "shoping centre" looks tidy already.

I got the same room as the last time. The one with the blue doors and bad shower. We met again for the birdlist. But now Anders is getting sick and skipped the dinner. I think everyone had it now except me. My troubles is the foot and the lips, still.

I talked with Janet, my daughter, on skype. She was working. And wrote a bit on the trip report.

Tomorrow we are going back to Guelmim and a new hotel. Breakfast is supposed to be at 6. But who knows? We shall leave at 7 to be able to have time enough at the lark fields and the waterhole.
Natti!

No lamp at the bed. Lucky I brought my own flashlamp. 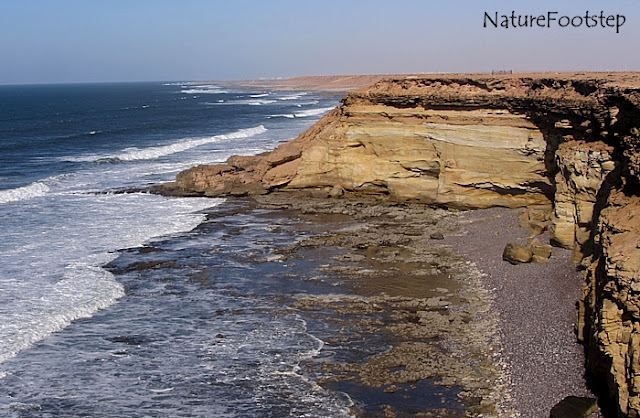 Seeing the coast like this you realise Morocco will one day disappear in the Atlantic Ocean.