Woke up at 6.50. Packed most of my stuff and went to brekfast. The group was already there and breakfast was putting forward. I ate some and put some in my backpack for use during the day. This hotel seem to always serve a lot more then anyone can eat.

Today I lost my backpack. At least I thought so. I was about to put something in it and I could not find it. I thought I forgot it at the breakfast room. But no. I went back to the room and there it was. On the chair and I did not see it. I´m getting senile. :(  Maybe this is my last trip?? So many things I "lost" this time. So many times I looked for things that was not really lost. I just did not see it. Spent a lot of time searching for my glasses for one. 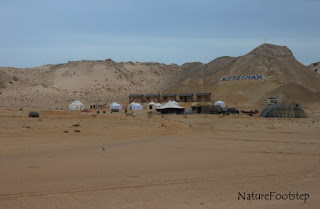 Well, we left to go 550-600 km back to Laayounne. The shot to the left was taken from inside the bus just before we  left the Dakhla peninsula.


We made the same two stops as we did on the way south. The little café and the desert stop where the crows was supposed to be. They were still not there. 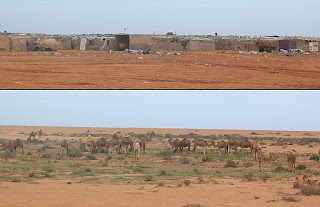 Took these shots from the bus. Seems to be a settlement. As poor as the fishermens village I think. But maybe not, a lot of camels were there. 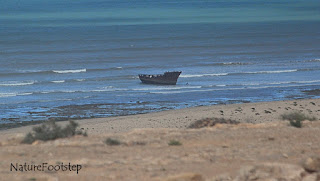 As we were going up north I was now sitting on the right side. Having a gorgeous Atlantic view half of the time. Now I did see all the ship vrecks I did not see when we were going south.

We made a stop at the wetland south of L.This days highlight.  Lots of ducks there and other birds. Stilts among them. Anders and 4 more went down to bird closer to the water. I did not dare walk down with my bad shoes and it was really steep to go down. And a lot of sand to go trough. 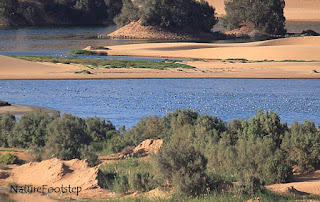 Anders, and all of us, was happy there was several new species for the trip on that location. The water surface dotted with birds. To bad it was quite a distance to them.

Going in to town to shop for tomorrow I found a place where they was selling shoes. I fond a pair I thought would be fine. 120 dirham. Sadly I think I will get blisters from them.


Then we headed for Sahara Line Hotel our stay for the night. We met again at 19.00 h in the lobby to go through the birdlist for today. And then dinner. I joined one of the coupels and we shared a bottle of wine for dinner as this hotel actually served wine. .
Back to the room for the usual writing. And I think we were watched. There was a policemen standing outside the hotel all night. Yes, I was up once and saw him there. He was the only person on the street when I went to bed and when i woke up in the night he was still there. Clearly bored to death.

Tomorrow we continue up north. Breakfast at 6 and departure at 7. 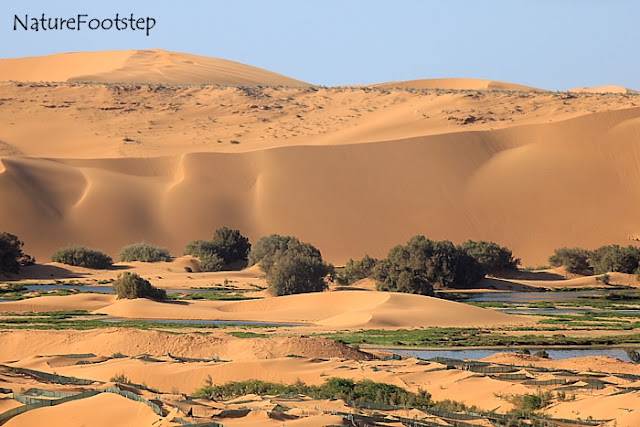 Posted by NatureFootstep at 3:48 PM