Malta 110423 Saturday, diving Gozo
Up at 6.00 as we are picked up at 7.00.
Made some bread to bring with us as we did not know if anything woudl be open a it is Easter evening (påskafton) today. At home we should have eaten eggs, but now, forget it! We were picked up and on our way. Johanna and I went with Véronique. It was raining for a while but not much. It stoped when we were on the ferry. The Ferry left as soon as we were onboard. We were the last cars to load, so we were lucky. It took about 20 min to cross the distance between the two islands. Passing Comino on the way.  We headed north through the city. This island is greener then Malta. And looks nicer, it is better taken care of. Roads are better and houses looks nicer. The harboru is named MGARR harbour.Yea, it spells like that. Arabian influence I guess.

We road along the coast and arrived at the divingsite eventually. Blue Hole - AzureWindow on Gozo. It was very hard to walk here as it was mostly holes an sharp edges all over the place. I think it is sandstone but it looks like lava. It must have been hard for the divers to walk down to the water with all their gear. I thought it was hard with mine. But they did alright, and Macke too. And Johanna photographing of course. 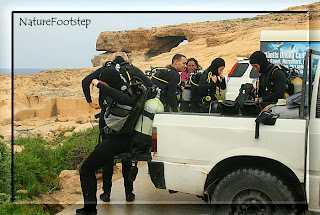 As they came back from the first dive it was sunshine again. And it was getting warm. I had spotted some birds flying and it turned out to be stilts. And a gull and some swallows. Finally something. :) Janet and I walking around the cliffs taking shots. Then the cars started to come. Kiosks for icecream and stuff to eat. And turists. Lots of them.  And more divers. 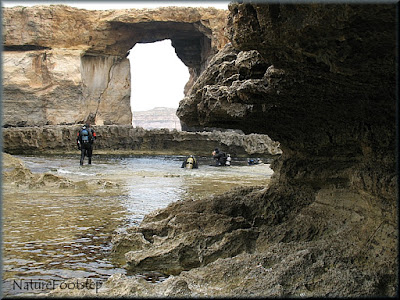 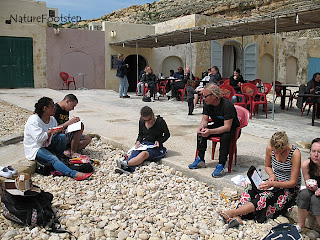 We headed to the other dive site. It was in what looked like a cave. There was a coffee shop and places where you could take a sunbath. And so we did, after eating something. But Véronique was still in her car so I went back up to get her. She was cold she said. She was born in an island outside south Africa so she was cold. There arrived a lot of tourists that were going an a small boat to see the Azure Window. And lots of families with kids on the side of the little lagoon. The little beach were great for children. I managed to get my back red despite the fact I did not sit long without a shirt. :( 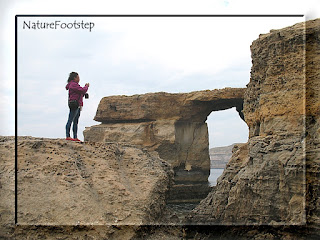 The ferry tour back was nice and I took a lot os shots. At the shop were a lot of doves that I tried to get a shot at.

After a shower we headed out to shop some food and check the tours to the caves. Then we boiled pasta and eat. Both the divers were sound asleep at 21.00. Janet is reading and I write. The diving is over now and they shall get some photos for the certificate. I bought myself a small Brie cheese and I had about half of it. It was rather good.


Tomorrow night at 17.00 we are invited to Peter and Véronique.