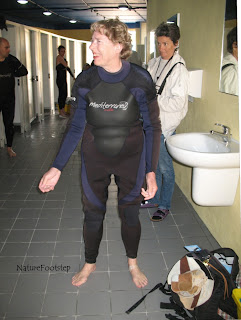 Malta 110425 Monday, Dolphin dayToday was "swimming with dolphin" day. We went up rather early to catch the bus at 8.20. A bit early but as we don´t know the area it is better to be sure, coming late was not an option. We were sceduled to 10.00 to meet the personal for the dive. It was sunshine but windy. The Mediterranean sea  was abit upset outside the area of the park.
9.45 we were finally allowed to pay the tickets and we were given a quetionaire to fill in and to learn the rules. No jewelry or other sharp stff would be allowed, as was teh plastic tejp I has on a wound. Dolphins are easily hurt and they eat about everything. :) At 10.00 we were let in and got our swimsuits. And further instructions. At the pool we were divided in two groups. So, the four of us and two kids were in one group. Two dolphin males were working.

The first part was to introcuse us to the dolphin. Touching, kissing and taking pics. After that we were out in the water and the dolpin rotated us there. It was so much fun. :)  Lastly there were a time for free swiming in the pool with both dolphins swimming around us. Cool!  The water in the pool was a bit chilly, but the suit took away most of it.

Removing the wetsuit was much harder then take it on. I had a hard time getting it off. :)

Then I saw the last part of the sea lions performance. I had seen some ducks when we arrived so I went there to see if I could take some shots. They had Common Shelduck (Gravand),  Eurasian Teal (Kricka) and Ferroginous Duck (vitögd dykand). The last one is new to me. Then I located some owls in cages. And a terrarium. 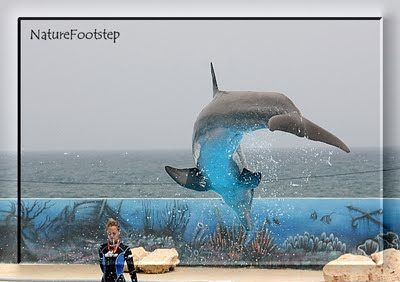 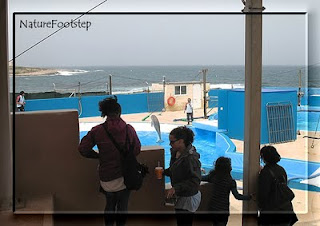 The Dolhin show started at 14.00. Johanna sat closes to the pool. Taking picks and writing like crazy. I too took a lot os shots. It was a good show. :) After the show we stayed a while. There were a small pool beside the main one. There was a young dolphin too. The trainers played games with them and it was fun to watch. Johanna took lots of notes and then started to ask the personal a lot of questions. She needed that for the paper she is doing in class. I´d say she got a lot. :) We bought all the shots of course. They are great. Johanna starts to talk english the entire time now and she is good at it. 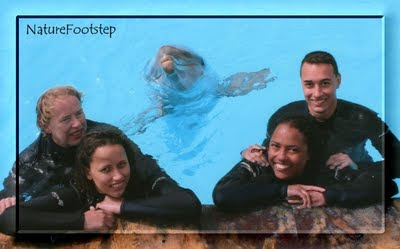 The lunch was very flexible. I took my sandwich, the others I think,  had icecream or whatever they could find.  :)

The last show was Parrots. It was kind of cool. Some birds for my blog maybe. :)

Then it was time to return to Bugibba. And the lady with the booking. We were supposed  to go to the caves tomorrow. We have an "open ticket" to that trip.
I don´t remember what we had for dinner. It is 21.20 and the others are asleep. I have to stop now as the battery is going low. 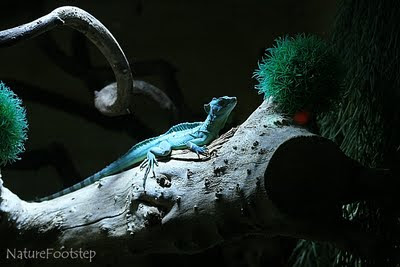