For a day this was My World in Costa Rica

jeeee, one of those early mornings or rather,  in the middle of the night, days.
We were packed and ready to go, but I had forgotten to get my breakfast. Luckily HG took it and gave it to me. Our first stop was Jaco where we looked for a Grey and White owl  and we found it. Our guide from yesterday had told us it was there. Great! 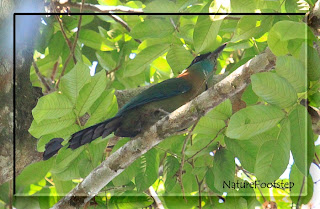 We continued to Villa Techa in Quepos where we were supposed to go birding for swifts. The bus was driving to the highest point at Villa Techa and then we had to climb a little. Not much swifts though. Maybe we were too late. But we did see front dotted swift and chestnut collored swift. Then Herman located a Blue-crowned Motmot, and when studying that one, a Ferruginous Pygmy-Owl came and sat down in a tree in the garden next to were we were. 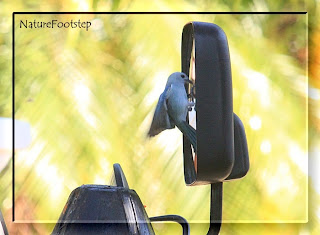 Done with this we continued to Manuel Antonio Nat park. To my dissappointment we did not stay at the beach. :( I would have loved it.
To get to the entrance we had to pass by a lot of tourist sales. On a bus I saw a blue bird looking at himself in the mirror. It was very angry of this intruder bird he saw there. That was fun.

In the nat park we walked a rather long way birding as we walked. Finally we came to a beach adn peopel started to look for seabirds. I didn´t bring the tube so I took some shots and them went down to the water and felt wat it was like. It was rather warm and people was swimming.

But this group is busy and I did not even have time to dry my feet until they started back. And I had to run. Later I think I understood why we was in a hurry all the time. I think the slow bus had something to do with it. Even if nothing was said. But my guess is that we should have had another hour if the bus had been a bit faster. :(

On our way back to the bus we had a little time to spend. I bought myself a bathing towel with a butterfly on it, and some small things for my family. And I have some small tokens from the beach with me as well.

We made a stop at the river Baru as Carlos wanted to fill up with gas. So we went to the bridge and did some birding from there. On one side we had a glimpse of the Pacific and on the other side was the river. There was swallows, vaders and some herons. 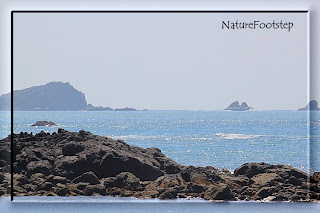 Goddbye to the Pacific Ocean.

Then we headed inland up to the highland again. And it was steep. After a while the engine was overheated and Carlos had to stop. We were in a rather narrow place and noone even hinted about going out. We just waited. Carlos and Herman was calling the agency, rather tired of the bus. The agency promised to have a bus on standby if we needed it. And we did. After a while the engine had cooled off a bit and Carlos started driving again. This time no more then 20 km/h to prevent another heating. Instead we get puncture no 3. On the way we also stoped at a local fruit shop. 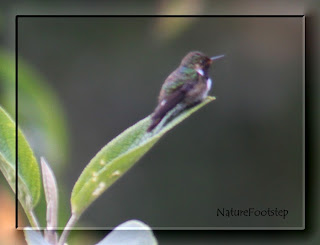 When we had the puncture we left the bus and started to walking and birding uphill. Poor Carlos!  We foudn that little hummingbird. It was hard to get and I don´t know what species it is as i forgot the notebbook.

We soon arrived at the place where we were supposed to have a coffebreak or late lunch. At  Gerorgianic (?)    I had a carrot bun and coffee. And it really tasted good. They had some feeders and I took some pics of course. And was sloppy enough to forget my notebook. :(  Too bad, but nothing to do about it.

The remaining road to Suria Lodge was long and troublesome, especially with this bus. But it seems that they have ordered a new one for tomorrow. This time it was first uphill and then a long way downhill and engine breaking a lot.

We arrived app at 19.30 and had dinner as soon as we installed ourselves in the rooms.

They had a computer we could use in the lobby and I showed Herman my blogs.

For dinner we was served fish, (öring) They have it in the river and it was really tasty.
We went through the spices list. We have approx 400 species now acc to HG.  And then the evening business. Don´t think we showered. So far out in the wilderness there was not much warm water. The room is cold but has one heater. And we could finally go to bed early without worrying about an early morning session. So far we had little more then 5 h sleep per night and that is not good in the long run. Brita sleeps already while I write down todays adventure.