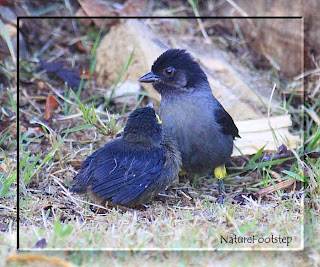 Woke up 5.45 and our bags ready for loading at 6.15. We had time for a short birding before breakfast at 6.45. I found some bushes that looked like "björnbär" and it seems like they are used the same way too. There are actually many plants that are similar to ours.
Almost done with breakfast I looked out the window and saw some black birds feeding a yound. They had funny yellow knickers. I hurried out to get some shots before we leaved. Yellow-thighed Finch was the name. The young almost ready to fly.

Another funny thing about this journey, like all others I have done. My hair is so soft now and my skin don´t need any cream. It is smooth anyway. I like that. 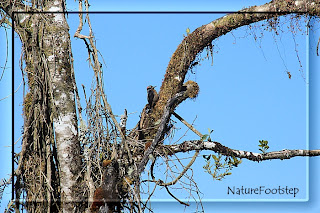 On this level you easily get to much pressure on the ears and has to swallow hard t odjust to the airpressure every now and then.  We left Suria Lodge at 7.oo and it was straight upwards. With a new bus and driver. We arrived at Quetzals around 9 and took the first tour as soon as everybody got their rooms. It is steep here and the elevation is almost 3400 above sea level. It is tough. It´s OK to go downhill, but then we have to go back up...... We found some new nice species despite everything. One of them was Hairy Woodpecker.

We also headed in the other direction to see the vey old tree. It´s about 1000 years old and had a cave on ground level. I think it was called Mountain Oak.

Lunch was served at 13.00 so we had some fun at the feeders for a while too. 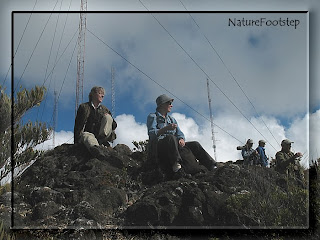 After luch we left for CR highest point. It was dry and almost desertlike. With bushes and dry trees.  They had a station at the top with a lot of antennas and stuff. Not so mucn birds but a terrific wiew over the valleybelow. Clouds beneath us circling the mountaintops. Beautiful  :) I think it was called Cerra de la Muerte 3400 above sea level. Well we were almost above tree level too. This place is the highest point on the Pan American Highway.

When we saw the bus again the driver was switching a wheel. I could not help myself but started to laugh. But it turned out it was not a puncture, he just had seen the tire was worn and decided to take the time to put a better one on. 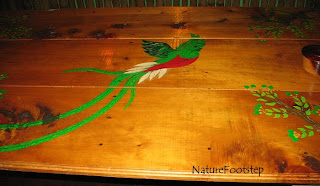 Back at the Lodge I took another look at the souveniers they had. They had vests but they was too large for me. I bought a pen in a painted box and some dolphin earrings. Then I took some shots of the paintings on the tables. It turned out that the owner had dont it himself.

At 17.30 we headed down the path from the morning walk to try to find some owls. I dod not see any but we heard some nightjars.

Dinner was a disaster. We were served only sallat and spagetti. No meat or bread or whatsoever. I dont thing anyone felt full when we were done. :( 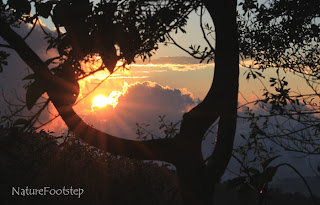 We skipped the spieces as we did not have that much today.  After "dinner" the girls sat in the bar for a while, drinking bear and talking. It was quite nice as the fire was going. Warm and cosy. Then Brita and I headed back to our cold little cabin. It was close as we had no1 on the corner of the main building.

The shower did not work of course, and it was cold. I sat on the bed with blankets around me to keep warm when writing. They had several beautiful blankets, "plädar" , on each bed to ensure we should sleep OK. I put one of them inside the sheets, that is warmer. 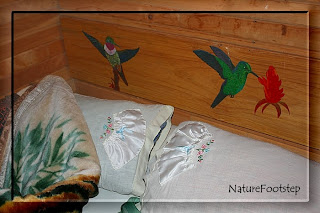