Woke up at 7 and switched bed as the Scottish guy left this morning. And then I spotted two of the bloodsucking bedbugs in the opposite bed. I crushed them and took them to the desk. So, the bug man got more work to do. But I was out of the room. I had a discussion with the man so after his advice I had everything locked up and in. Making it harder for bugs to get into my suitcase. I was promised as well to get all my stuff cleaned up and washed before leaving the hostel. 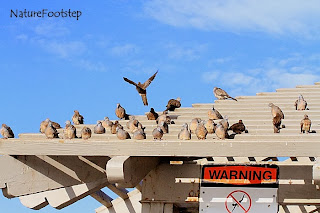 After breakfast I headed for the parks to watch birds and people for a while. Lots of doves in the area. But this one to the right has not read the sign. NO DIVING!

And this is obviously a bus stop for doves. 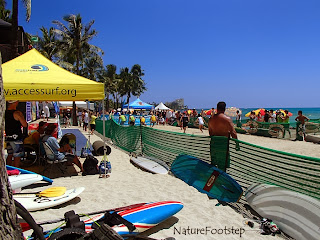 My daughter and grandson was late and by that time they arrived I knew where on the Waikiki beach the Duke Festival were held so we went straight to the place. It was a very hot day and my grandson developed a headache.
Quote: "Duke's OceanFest is held each summer in Waikiki in honor of Hawaiian Duke Paoa Kahanamoku, who is remembered as the greatest waterman who ever lived, and Hawaii's ambassador of Aloha. Among his many accomplishments, Duke Kahanamoku was an Olympic gold medal swimmer; a surfer; an esteemed canoe steersman; a Hollywood actor; and the Sheriff of Honolulu." 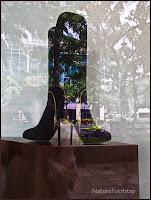 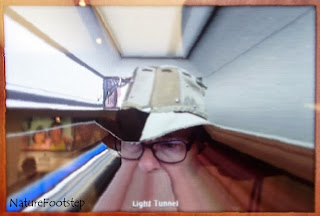 Seems like a great man and there was several statues of him as well.
We watched some of the games on land and on surfboards.
A pair of nice boots in a window.
After that we went to check out computer shops instead. My grandson needs a new computer. And I amused myself watching photo filters on a Mac computer. :)  This is me, above, with the filter Light tunnel. Nice, don´t you think?

Then my company took the bus back to the house and I went to another part of the beach. At the beach I got the company of a talkative woman with Norway- Swedish heritage. She just moved in and felt a bit lonely. Arriving back at the Hostel I saw the 5 person bike looking for riders. Really crazy!
To finish the day I had a discussion with Anton who is to study communication in Honolulu. Told him what I think of GOOGLE among other things. 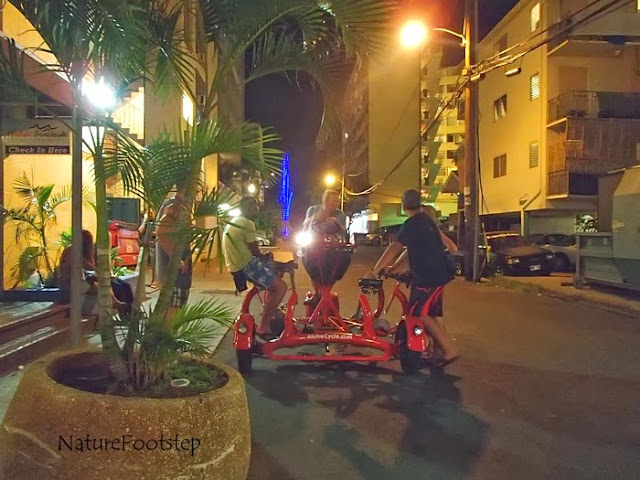