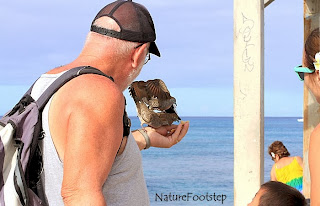 Spent the morning at the beach as usual. There was a man on the pier feeding the doves. A boy noticed a bird with a string on it´s feet. It turned out to be Asian black hair. The man was used to it and had a scissor to cut it off. He told us the long black hair often get stuck on the doves feet and when they try to rid themselves from it it tightens and can actually cause a lost foot. It is because the black hair is so strong :(
Bird sculpture to the left. 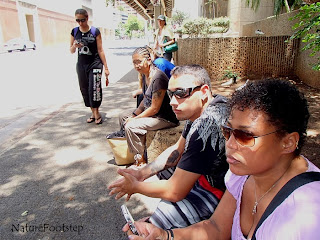 At 10.30 I was at Bishop Street and met my daughter and grand daughter. My daughter looked different as she had cut off her hair. It looked great. Then my grandson arrived too and we took visited the school shop. I bought myself a backpack but not the color I wanted. I wanted one with the colors of the rainbow but my daughter said, NO, you can´t buy that one everyoen will think you are a gay person. :( .  Then it was time to take the bus to Hawaii Pacific University. We had a short tour in the building and then spent the time in the surrounding area while my granddaughter took her final test for the summer classes she had taken. 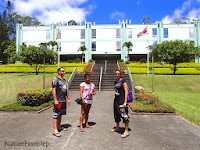 It is a beautiful place with nice views over the mountain range and forests. Nice garden areas and sports arenas. I found two more birds I had not seen earlier too. A great place for a school and well tended too. Somebody small wants to go to school. To the right.


Back in town I took the bus to the Hostel and there the room was turned upside down. Again! They had been spraying about everything. Even my nametag on the bed was gone. Guess they took the opportunity to do a good job while there was not that many guests in the room. Most of the guys had gotten rooms now and was off to prepare for school. 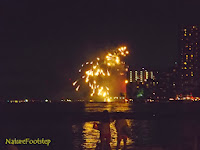 After fixing the bed and whatever I had to do I went to the beach. Even the beach was almost empty. A bit spooky actually. At eight I sat on the stonewall at Waikiki Beach eating my Subway. And then the fireworks started. I had forgotten about it but it was soo timely. I just had to move a bit as people were standing in my way. I stayed there for quite a while as the hotel on the other side of the street started to play soft music. Quite a nice way to end the day. 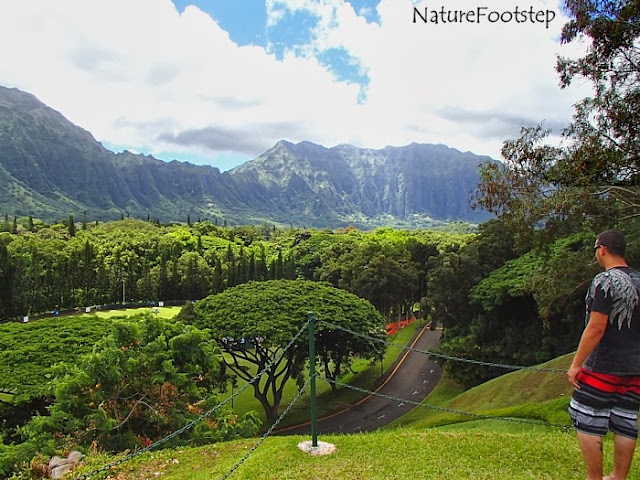 Posted by NatureFootstep at 1:25 PM