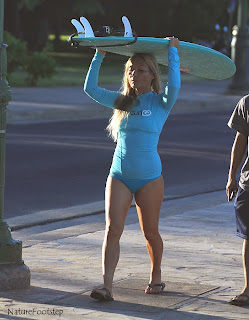 Time for the last activities in Honolulu. I woke up at six so I have already taken a walk at the beach and parks and are waiting for breakfast. Then I will finish packing so we can go when my family pick me up at eleven. Hopefully for a surfing activity at Waikiki.
At 7 a´clock this woman is already heading for the waves.
My family arrived at appointed time and we were allowed to park the car at the Hostel. We put my stuff in the car and left for Waikiki beach. We waited a while for a friend to my granddaughter as they thought they needed instructions and he knew how to surf. To bad I´m already set for departure so I did not try the surfboards. Did not want to be in the plane with salt on me. But, I finally got to see them surfing. Well, at least trying to.The waves was much lower now then it was in the morning. A pirate ship was also in the area. 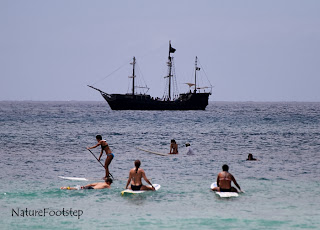 After surfing we went to an ice cream store to cool off a little. And then we headed for the market to try to find the dress I liked the first day. And we did so I bought one.


Then we picked up the car and went to the house. And as usual everyone is busy but me.

Before it was time for the airport we grabbed a pizza at Pizza hut. Had to eat something as food was not served on the plane. And the plane was going straight to Chicago. They drove me to the Airport and with passport and "ticket" in hand we said good-bye for now. And I went into the building. 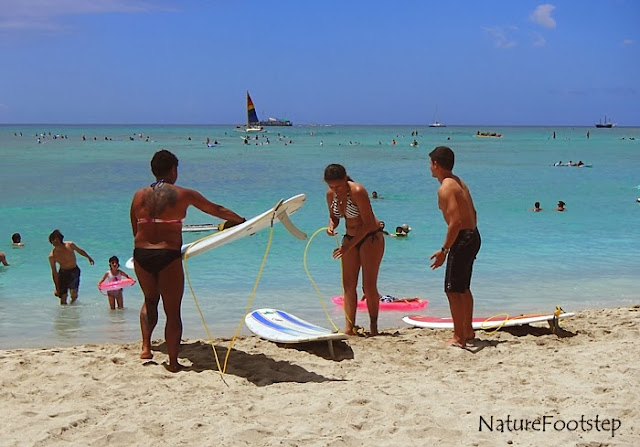 At midday the sun are right up and don´t cast that much shadows. Only the lifted board cast a shadow.

And this is the end of Honolulu trip report.
Thanks everyone that have enjoyed the trip with me.

And, as usual, now the trouble begins.
The first thing that happened was that the luggage had to be scanned for plants and animals. That turned out ok and my luggage got a yellow tag on it.

Then I went to the line for check in. I was assigned a station and headed for it. But when I was closing in the person staying there was leaving. Eh.... and did not come back. What the f....  Looking around the station I located a computer. Seemed like I was about to have to do it on my own. I did not like that. I was going two planes and having the luggage. I did not want to take any chances of getting it wrong.  Or be without a seat. So, I stayed put until somebody came and did it for me. And....she could not appoint any seats for me due to software problems. :(  So, I had to go in to the gate without having seats in any of the planes.
In the gate I finished the pizza I had brought with me and then I lined up at the empty desk to see if I could get the seats. Somebody came after a while and started to work at a computer but did not care about us people waiting. Then another one came and we could start talking to him. It turned out the first one was fixing the in-checking for all of us that was not finished. So at the time we were to board the plane I got my tickets and the note for my luggage. Turned out they gave me a seat in the middle of both planes so I could not move around as I usually do. First plane was  night time flight so it was dark most of the time. Landed in Chicago at 8.30 and spent 8 boring hours there. Next flight was also mostly dark and we landed in Arlanda at 8 o'clock Monday morning September the 2:nd.
Then I had to find bus and train to get home. With an open suitcase as it turned out they opened and destroyed it in Honolulu. Leaving notes they had checked it for security reasons, again!,  but did not take responsibility for it. What can I say, bastards! My lock would have been easy for them to destroy. But they had to destroy the suitcase. Bad ending of a great trip. The same thing happened to me when I was on Big Island 10 years ago. Hawaii don´t seem to think I shall leave!