Dolphin day! I woke up as planed and went to the meeting place at 5.50, My granddaughter just came around the corner worried I overslept. Impossible to oversleep a day like this. :) We were the only ones picked up at this location And the last ones so the bus headed to the Leeward coast. Most of the others was Japanese so my granddaughter was pleased. She could practice the language. Great opportunity as she will soon move to Japan.

At seven we were at the location, close to where we were yesterday, and ready to embark the boat that will take us out. We were welcomed by the staff of Dolphin and You as the boat headed out. To begin with we had a small ceremony where everyone was given a flower that we throw out to the water for good luck.  Those of us that did not have the equipment for snorkeling was given one from the staff. With instructions if needed. And we did. But I soon found out I remembered how to do it since I was in Kenya. 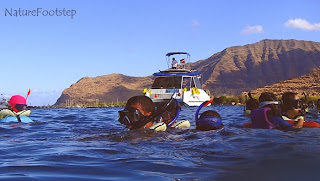 The boat was slowly moving around to try to locate the dolphins and it did not take long. Around 8 o´clock we were in the water. Lol, a bit tricky to get into the water with those BIG FEET! But  I manage and the breathing was OK too. And waterproof camera tied to the wrist. Ready to find some dolphins. And I did despite the fact I was not used to snorkeling I got shots of both dolphins and family. Happy me! Soo much fun! I was not able to come close to the dolphins as I could not go deeper into the water. But I am pleased with the experience. I think I saw at least 15-20 of them. 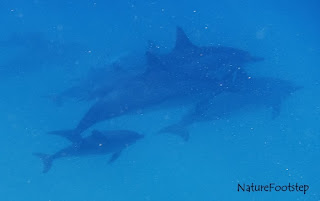 After about 30 min we went up on the boat again to change location. We headed slowly up north a bit to a coral reef and to dive for corals, fish and turtles. And with my granddaughter at the steering wheel. :) o, almost forgot, we spotted some flying fish during the ride too. Shimmering during the flight.

The next dive was as fun as the dolphins but more to look at. Some Green Turtles swimming or lying on the ocean floor. Colorful fish, corals and people. And of course my cameras battery run out. But luckily that was at the end of the dive. My granddaughter also takes shots with her cellphone  camera. She was given a waterproof casing for it as a gift from her brother. The camera with casing worked quite well. 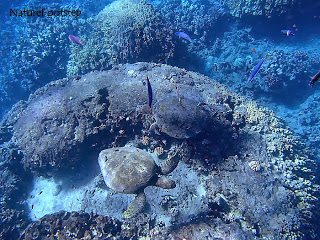 Finished diving and up on the boat again I noted somebody trying out the paddle board. I think that is what it is called. So I asked if I could try it too. And I could. And I managed to stand up for a moment without falling into the water. And my grandson tried it too.

On the way back we were given breakfast and purple bread! I don´t remember what gave the bread that color. But it was rather good. But strange. And we were entertained. The staff guys danced hula hula and played music for us. Not too serious though but having fun with it.

That´s me trying to master the paddleboard. 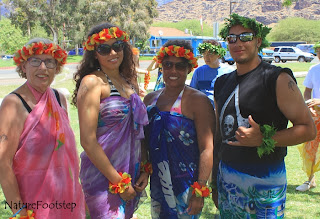 Back on land we were given a first lesson in Hula dancing and a brief history lesson. Dressed in beautiful hula clothing. And then it was time to go back to Honolulu. I was at the Hostel around one and went to sleep for two hours. That was great as I realised the diving had taken it´s toll, I was tired.


When I woke up I went out and checked out the shops. No more swimming today. I found myself a blue dress that I liked. And a pair of cotton shorts with palms on them. The first dress I bought for several decades. I never use it. But this one I might. 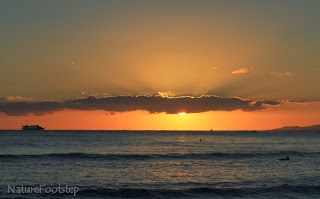 Then I went down for a short swim after all. And watching a beautiful sunset. Having my "dinner" sitting at the beach I was surprised by a short firework starting at the Hilton. They don´t have it on Tuesdays so it must have been some special reason.
Now we are only three people in the room. Me and the "cooking" couple. I took a shower and uploaded all images. And wrote a little. Then hit the sack!

This day will be hard to beat. Almost perfect. :) 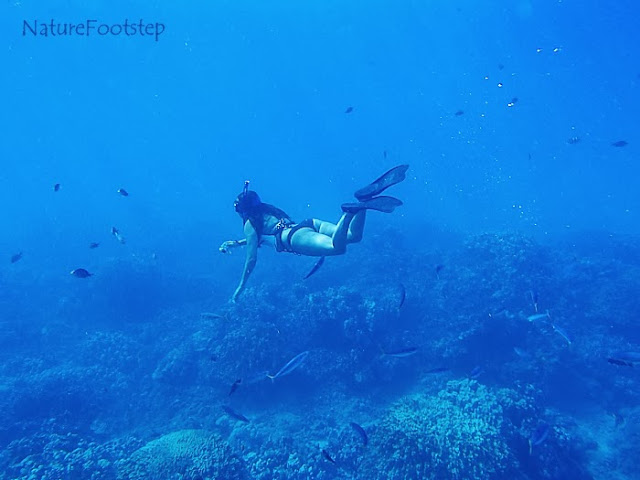