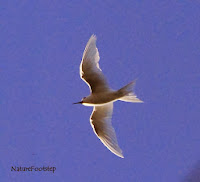 I spent the morning, before breakfast, trying to catch some White Terns "on film". They are quite fast so it is not easy. I think there was 6 birds souring the sky. After that show a Great Fregatebird arrived on the scene. Cant be easy to be a Fregatebird. It was harassed by parrots in the same way our raptors are by gulls.
White Tern to the right. Fregatebird below. 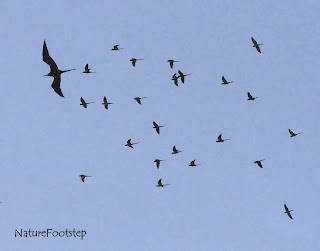 Leeward side were on the agenda today. So after breakfast I took the bus to the house. We were late as usual. We did not get on our way until time was past one.
I´m a little disappointed on Oahu for it's highways everywhere. Only urban areas and highways. How fun is that? Not much left of the island's original appearance. Johanna drove us to a small lagoon where we took a swim and walked around a bit. It was beautiful of course even if the lagoon seemed to be artificial. It was too hot for tanning. After swimming I walked around the cliffs. It was volcanic of course and quite interesting to watch. I chatted with a few people from Vietnam too. It turned out to be 4 Lagoons at Ko Olina. We were at no 4, Ulua. I think that if I go to Oahu again I might stay at that place. 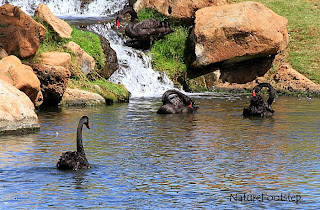 On the way back to the main road we slowed down so I could take pictures of some black swans at a small waterfall. Park version of course, but that´s OK. 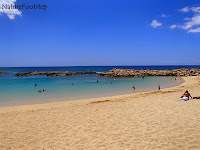 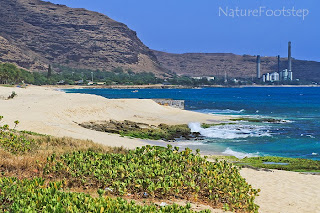 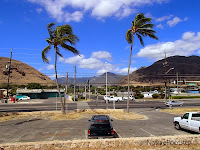 We stopped at a place by the shore and took some photos of nice green algae. There were a lot of people fishing so there was no reason to stay. Next stop was a boiling hot beach, Makaha Beach Park,  and I stayed in the shade of some bushes. And fell asleep to my families amusement. But it was nice . Then we were looking for an ancient temple that should be in the neighborhood. But the road was closed so we could not get there. So we made a stop for an early dinner instead. My family seem to be hungry at all times. And then back to Honolulu and the house. A bus was going down to Waikiki just a few minutes after we arrived so I took it. No need to drive me then.  But I missed the sunset as I was on the bus.
Leeward side was very dry and orange-brown in color. Big difference from what we've seen before. But beautiful in its own way . " Dinner" at the beach o late shower and sleep .

Dolphin tour will be tomorrow as the organizers changed our tour. We will be picked up at the Marriott at 5:45.